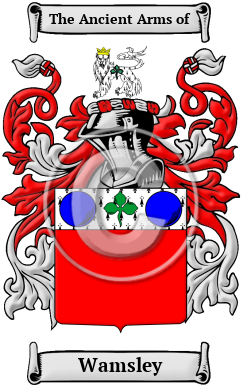 Early Origins of the Wamsley family

The surname Wamsley was first found in Lancashire at Bickersfatte and Houghton. " In after times the township [of Wilpshire in Lancashire] became a possession of the Walmesleys, of whom Sir Thomas Walmesley died seised of the estate in the reign of Charles I." [1] Today Walmersley is a village in the Metropolitan Borough of Bury, Greater Manchester. The place name literally meant "lake by the wood." [2]

"The Walmsleys, who derived their name originally from a Lancashire township, are now very numerous in the Preston district. There was an old and distinguished family of this name at Dunken Haigh or Dunkenhalgh, Blackburn, during the 16th and 17th centuries: Sir Thomas Walmsley, of Dunkenhalgh, was a judge of the Common Pleas in the reign of Elizabeth. Walmesley, of Dunkenhalgh, was one of the intended Knights of the Royal Oak, an Order, however, the institution of which by Charles II. was never accomplished (B.). The Walmesleys of Coldcotes branched off from the Dunkenhalgh stock in the 17th century." [3]

Roger de Walmeresleghe was listed in the Subsidy Rolls for Lancashire in 1332 and later, John Wamesley was a Freeman of Leicestershire in 1549. [4]

Early History of the Wamsley family

Until quite recently, the English language has lacked a definite system of spelling rules. Consequently, Anglo-Saxon surnames are characterized by a multitude of spelling variations. Changes in Anglo-Saxon names were influenced by the evolution of the English language, as it incorporated elements of French, Latin, and other languages. Although Medieval scribes and church officials recorded names as they sounded, so it is common to find one person referred to by several different spellings of his surname, even the most literate people varied the spelling of their own names. Variations of the name Wamsley include Walmsley, Warmsley, Walmsly, Walmesley, Wormsley, Walmsleigh, Warmsleigh, Walmsleigh, Walmesleigh, Wormsleigh, Wolmsley, Wolmsleigh, Walmslee, Walmsley, Walmslea, Warmslea, Warmslee, Walmslie, Warmslie, Walmslie, Walmeslea, Walmeslee, Walmeslie, Wormslee, Wormslie, Wormslea, Wormeslie and many more.

Distinguished members of the family include Sir Thomas Walmesely (1537-1612), English judge, eldest son of Thomas Walmesley of Showley in the township of Clayton-le-dale and of Cunliffe in the township of Rishton, Lancashire. "His reputation for learning was great, and he early evinced his independence by allowing bail in a murder case, contrary to the express injunctions of the queen...
Another 60 words (4 lines of text) are included under the topic Early Wamsley Notables in all our PDF Extended History products and printed products wherever possible.

In the United States, the name Wamsley is the 11,432nd most popular surname with an estimated 2,487 people with that name. [5]

Wamsley migration to the United States +

Searching for a better life, many English families migrated to British colonies. Unfortunately, the majority of them traveled under extremely harsh conditions: overcrowding on the ships caused the majority of the immigrants to arrive diseased, famished, and destitute from the long journey across the ocean. For those families that arrived safely, modest prosperity was attainable, and many went on to make invaluable contributions to the development of the cultures of the new colonies. Research into the origins of individual families in North America revealed records of the immigration of a number of people bearing the name Wamsley or a variant listed above:

Wamsley Settlers in United States in the 17th Century

Wamsley Settlers in United States in the 18th Century