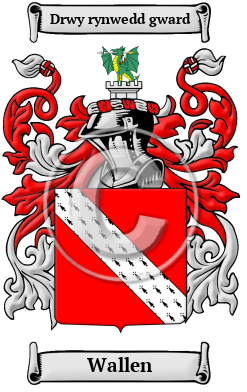 Early Origins of the Wallen family

The surname Wallen was first found in Pembrokeshire (Welsh: Sir Benfro), a county in south-west Wales, anciently part of the Welsh kingdom of Deheubarth, where the family claim descent from Gualgnain or Gwalwynne, who was King Arthur's sister's son, as attested by historians William of Malmesbury, and Robert of Gloucester. The name traces its roots to Normandy where Geoffry Wawein was listed there in 1198. [2]

The Domesday Book lists the name as Walduinus in Staffordshire. [1] Later in 1205, Welwin was listed in Essex.

John Wallensis, Walensis or Galensis (fl. 1215) was a Welsh canon lawyer who taught at Bologna, and wrote glosses and another John Wallensis or Waleys (fl. 1283), was a Franciscan, described as 'of Worcester' in a manuscript of his 'Summa Collectionum' at Peterhouse. [3]

Early History of the Wallen family

The Welsh have an extremely large amount of spelling variations of their native surnames to their credit. It was up to the priest or the scribe taking the official records to determine how the spoken name was to be made literal. As time progressed, the old Brythonic names of Wales were recorded in English, which was especially problematic since the English language had extreme difficulty recording the highly inflected sounds of Cymraeg. Spelling variations were, however, also carried out according to an individual's design: a branch loyalty within the family, a religious adherence, or even patriotic affiliations could be indicated by spelling variations of one's name. The spelling variations of the name Wallen have included Walwyn, Wallwyn, Wallin, Walwin and others.

In the United States, the name Wallen is the 4,322nd most popular surname with an estimated 7,461 people with that name. [4]

Wallen migration to the United States +

Many Welsh families joined their Scottish and Irish neighbors during the late 1800s and early 1900s in seeking refuge in North America. Like the Irish and Scottish, many Welsh anxiously awaited the work, freedom, and opportunities that they believed lay in North America. Those who did journey over to the United States and what became known as Canada often realized those dreams, but only through much toil and perseverance. Whenever and however these Welsh immigrants arrived in North America, they were instrumental in the creation of the industry, commerce, and cultural heritage within those two developing nations. In the immigration and passenger lists a number of early immigrants bearing the name Wallen were found:

Wallen Settlers in United States in the 17th Century

Wallen Settlers in United States in the 19th Century

Wallen Settlers in Australia in the 19th Century

Motto: Drwy rynwedd gward
Motto Translation: In this cause I would bleed.

Suggested Readings for the name Wallen +