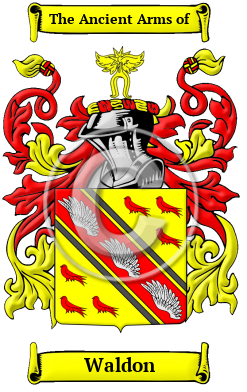 Waldon is a name of ancient Anglo-Saxon origin and comes from a family once having lived in or near any of the places named Walden in Essex, Hertfordshire, and Northern Yorkshire. Waldon is a local surname, which belongs to the category of hereditary surnames. Other types of local surnames include topographic surnames, which could be given to a person who lived beside any physical feature, such as a hill, stream, church or type of tree. Habitation names form the other broad category of surnames that were derived from place-names. They were derived from pre-existing names for towns, villages, parishes, or farmsteads. Other local names are derived from the names of houses, manors, estates, regions, and entire counties. The surname Waldon comes from the Old English words wealh and denu, which mean foreigner and valley. Thus, the surname would have been given to a person who was a stranger from a valley. Another source claims a slightly different origin of the place name: "The name Walden is said to be derived from the Saxon words Weald and Den, signifying a woody valley. At a latter period the place was called Waldenburgh. " [1]

Early Origins of the Waldon family

The surname Waldon was first found in Essex at Saffron Walden. "The name Walden is said to be derived from the Saxon words Weald and Den, signifying a woody valley. At a latter period the place was called Waldenburgh; and in the reign of Stephen." [1]

Some of the family were granted the lands of Walden Abbey and adopting their surname from those lands.

Another source notes that Walden means "valley of the Britons," from the Old English "walh" + "denu." [2]

King's Walden in Hertfordshire dates back to Saxon times when it was originally known as Waleden in 888, but by the time of the Domesday Book of 1086, it was known as Waldene and was held by the king at that time. [2]

Today, Saffron Walden is a market town in Uttlesford district of Essex, home of Walden Abbey, a Benedictine monastery, founded by Geoffrey de Mandeville, 1st Earl of Essex between 1136 and 1143. Walden and Walden Head are hamlets in the Yorkshire Dales, North Yorkshire and Walden Stubbs is a village and civil parish in the Selby district of North Yorkshire. [1]

Early History of the Waldon family

The English language only became standardized in the last few centuries; therefore,spelling variations are common among early Anglo-Saxon names. As the form of the English language changed, even the spelling of literate people's names evolved. Waldon has been recorded under many different variations, including Walden, Waldern, Waldon, Waldew and others.

Notables of the family at this time include Sir Alexander Walden (died 1401), knighted by 1372, Member of Parliament for Essex (1388-1390.) Roger Walden (died 1406), was an English diving, Archbishop of Canterbury in 1397, an English treasurer, church figure, served Richard II as secretary, elected...
Another 45 words (3 lines of text) are included under the topic Early Waldon Notables in all our PDF Extended History products and printed products wherever possible.

In the United States, the name Waldon is the 5,761st most popular surname with an estimated 4,974 people with that name. [6]

Waldon migration to the United States +

For many English families, the political and religious disarray that shrouded England made the far away New World an attractive prospect. On cramped disease-ridden ships, thousands migrated to those British colonies that would eventually become Canada and the United States. Those hardy settlers that survived the journey often went on to make important contributions to the emerging nations in which they landed. Analysis of immigration records indicates that some of the first North American immigrants bore the name Waldon or a variant listed above:

Waldon Settlers in United States in the 17th Century

Waldon Settlers in United States in the 19th Century

Waldon Settlers in New Zealand in the 19th Century