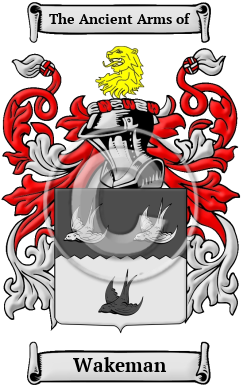 Early Origins of the Wakeman family

The surname Wakeman was first found in Devon where they were mentioned as men of great influence in the Church and public affairs. Traditionally, the Wakeman, in the ancient Saxon village before the Norman Conquest in 1066, was a man who sounded the horn during the evening to mark the time when criminal offences took on a greater penalty.

The Wakeman of Ripon, Yorkshire has blown his horn faithfully every day at 9:00pm at the four corners of the obelisk in Ripon Market since 886. This "Setting the Watch" tradition is further shown by having the horn on the Arms of Ripon and again appearing on the Harrogate borough coat of arms.

Early History of the Wakeman family

This web page shows only a small excerpt of our Wakeman research. Another 71 words (5 lines of text) covering the years 1549, 1688, 1592, 1659, 1662 and 1679 are included under the topic Early Wakeman History in all our PDF Extended History products and printed products wherever possible.

Sound was what guided spelling in the essentially pre-literate Middle Ages, so one person's name was often recorded under several variations during a single lifetime. Also, before the advent of the printing press and the first dictionaries, the English language was not standardized. Therefore, spelling variations were common, even among the names of the most literate people. Known variations of the Wakeman family name include Wakeman, Wakman, Wakeham, Waikham and others.

Notables of this surname at this time include: John Wakeman (died 1549) an English Benedictine, the last Abbot of Tewkesbury and first Bishop of Gloucester; Sir George Wakeman (died 1688), English royal physician to Catherine of Braganza, Consort of Charles II of England; and John Wakeman, Bishop of Gloucester. He was the son of Edward Wakeman (1592-1659) of the Inner Temple. "George Wakeman, who was a zealous Roman Catholic, was educated...
Another 71 words (5 lines of text) are included under the topic Early Wakeman Notables in all our PDF Extended History products and printed products wherever possible.

In the United States, the name Wakeman is the 11,433rd most popular surname with an estimated 2,487 people with that name. [1]

Wakeman migration to the United States +

For political, religious, and economic reasons, thousands of English families boarded ships for Ireland, Canada, the America colonies, and many of smaller tropical colonies in the hope of finding better lives abroad. Although the passage on the cramped, dank ships caused many to arrive in the New World diseased and starving, those families that survived the trip often went on to make valuable contributions to those new societies to which they arrived. Early immigrants bearing the Wakeman surname or a spelling variation of the name include:

Wakeman Settlers in United States in the 17th Century

Wakeman Settlers in United States in the 19th Century

Wakeman Settlers in Canada in the 19th Century

Wakeman Settlers in Australia in the 19th Century

Wakeman Settlers in New Zealand in the 19th Century