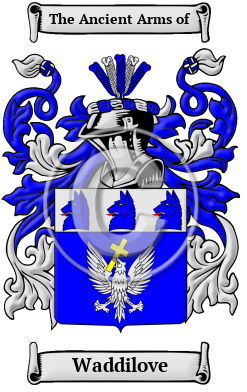 The Waddilove surname is a habitational name thought to have been taken on from the since lost place, Wadlow in Toddington, Bedfordshire. This place named in turn, is derived from the Old English personal name Wada, and the Old English "hlaw," meaning a "hill," or a "barrow."

Early Origins of the Waddilove family

The surname Waddilove was first found in Bedfordshire (Old English: Bedanfordscir), located in Southeast-central England, formerly part of the Anglo-Saxon kingdom of Mercia, where they held a family seat as Lords of the Manor. The Saxon influence of English history diminished after the Battle of Hastings in 1066. The language of the courts was French for the next three centuries and the Norman ambience prevailed. But Saxon surnames survived and the family name was first referenced in the year 1212 when John de Wadelaw held estates in that shire.

Early History of the Waddilove family

This web page shows only a small excerpt of our Waddilove research. Another 150 words (11 lines of text) covering the years 1455, 1487, and 1867 are included under the topic Early Waddilove History in all our PDF Extended History products and printed products wherever possible.

The English language only became standardized in the last few centuries; therefore,spelling variations are common among early Anglo-Saxon names. As the form of the English language changed, even the spelling of literate people's names evolved. Waddilove has been recorded under many different variations, including Wadlow, Waterlow, Waddilove, Waddley, Wadleigh, Wadylove, Waddilow, Waddelow, Waddilove, Waddiloe, Wadiloe and many more.

More information is included under the topic Early Waddilove Notables in all our PDF Extended History products and printed products wherever possible.

Waddilove Settlers in Australia in the 19th Century