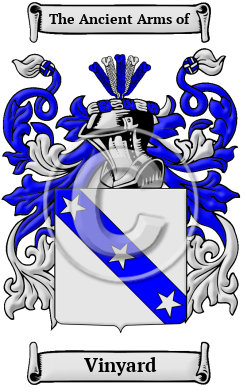 Early Origins of the Vinyard family

Early History of the Vinyard family

Distinguished members of the family include Sir Ralph Winwood (c. 1563-1617), an English diplomat and politician, English Ambassador in France, Secretary of State and Privy Councillor from 1614 until his death. He was born about 1563 at Aynhoe in Northamptonshire, the son of Richard Winwood. His grandfather, Lewis Winwood, was at one time secretary to Charles Brandon, duke of Suffolk. His father was described in the university registers as 'plebeius.' He owned no land, and possibly was a tenant on the Aynhoe estate which belonged to Magdalen College, Oxford. On his death, before 1581, his widow Joan married John Weekes of...
Another 318 words (23 lines of text) are included under the topic Early Vinyard Notables in all our PDF Extended History products and printed products wherever possible.

In the United States, the name Vinyard is the 10,013rd most popular surname with an estimated 2,487 people with that name. [5]

Vinyard migration to the United States +

Vinyard Settlers in United States in the 18th Century