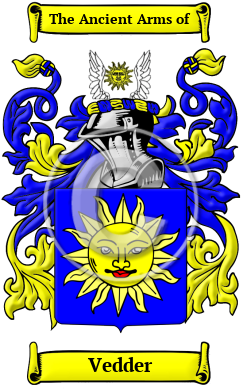 Medieval Austria is the ancient homeland of the Vedder family. Austria, which was originally home to a Celtic people, was conquered by the Roman Empire in about 15 BC. Following the fall of Rome, Austria was repeatedly invaded by barbarian tribes, such as the Vandals, Visigoths, and Huns, who swept in from the east. During the 5th and 6th centuries, the Alemanni, Avars and Slavs settled Austria. The Avars were defeated in 785 by the Frankish emperor Charlemagne, who set up the East Mark, which later became known as the Österreich. Austria was ruled by the Babenburger dynasty until 1278, when they were succeeded by the Hapsburg dynasty, which ruled Austria until the 20th century.

Early Origins of the Vedder family

The surname Vedder was first found in Bavaria, where the name, historically associated with the landed aristocracy, could be considered to have played a major role in the feudal society which became the backbone of early development of Europe. The name was derived from the German word for "cousin," from the German word denoting "father's brother; one related to another, later, a male cousin." [1]

The main branch of the family left Bavaria for Styria in Austria in 1587 and later moved into Silesia where they became one of the most respected families. The ancestral seat was the castle and estates of Feistritz, near the city Cilley, two miles from Graz in Styria. The family also acquired the castle and manor Miestitz near Oppeln in Silesia.

Early History of the Vedder family

This web page shows only a small excerpt of our Vedder research. Another 249 words (18 lines of text) covering the years 1653, 1822, 1547, 1622, 1666 and 1734 are included under the topic Early Vedder History in all our PDF Extended History products and printed products wherever possible.

One can encounter great variation in the spelling of surnames: in early times, spelling in general, and thus the spelling of names was not yet standardized; and later, spellings would change with branching and movement of families. Variations of the name Vedder include Vetter, Voetter (Bavaria), Votter (Bavaria), Vetters, Vetterle, Voetterl, Vetterling, Vetterlein, Vetterley, Vetterline, Vedder (northern Germany), Vett, Veth, Vether, Fett, Fetter, Fetters, Fetterle and many more.

Prominent among members of the name Vedder in this period include the knight Eusebius Vetter, who so distinguished himself at the Battle of the White Mountain during the uprising...
Another 28 words (2 lines of text) are included under the topic Early Vedder Notables in all our PDF Extended History products and printed products wherever possible.

In the United States, the name Vedder is the 13,138th most popular surname with an estimated 2,487 people with that name. [2]

Vedder migration to the United States +

After the First World War, Austria became a republic. The Treaty of Versailles broke up the empire in 1919 and many of the Sudeten Germans were incorporated into the new nation of Czechoslovakia. In the 20th century, many Austrians migrated to other parts of Germany or Europe, as well as to North America. In the United States, the majority of settlers landed in Philadelphia, and moved on to Ohio, Texas, Illinois, California, New York, and Maryland. Many German settlers also migrated to Canada, particularly Ontario and the Prairies. Amongst the settlers in North America with this distinguished name Vedder were

Vedder Settlers in United States in the 17th Century

Vedder Settlers in United States in the 18th Century