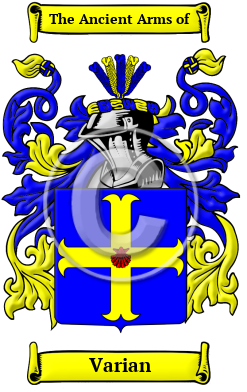 Early Origins of the Varian family

The surname Varian was first found in Burgundy (French: Bourgogne), an administrative and historical region of east-central France where this distinguished family held a family seat in the Franche-Comte, and were members of the aristocracy of that region.

Nicolas Varin, born in 1669, son of Nicolas and Jeanne of Groincour of Rouen, travelled from France to Canada in the 17th century. After arriving in the province of Quebec he married Marie-Anne Ronseray, daughter of Jean and Jeanne, at Boucherville on 29th October 1697. [1]

Early History of the Varian family

Another 35 words (2 lines of text) are included under the topic Early Varian Notables in all our PDF Extended History products and printed products wherever possible.

Varian migration to the United States +

Varian Settlers in United States in the 19th Century

Varian Settlers in Australia in the 19th Century