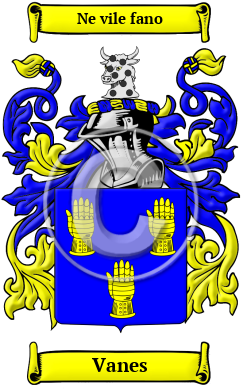 The surname Vanes is derived from the Middle English words "fein," "fayn," or " fane," which all mean "glad." The name was a nickname for a happy or good-natured person. The name could also have been a local name derived from the expression "at the van" or in other words near the "threshing-floor" derived from the word "van" which was a threshing instrument.

Early Origins of the Vanes family

The surname Vanes was first found in Monmouthshire (Welsh: Sir Fynwy), where the ancestors of the earls of Westmorland, "wrote their name Vane, and descended from Howel ap Vane, living there before the time of William the Conqueror" [1] living about the year 1060.

Early History of the Vanes family

The Welsh have an extremely large amount of spelling variations of their native surnames to their credit. It was up to the priest or the scribe taking the official records to determine how the spoken name was to be made literal. As time progressed, the old Brythonic names of Wales were recorded in English, which was especially problematic since the English language had extreme difficulty recording the highly inflected sounds of Cymraeg. Spelling variations were, however, also carried out according to an individual's design: a branch loyalty within the family, a religious adherence, or even patriotic affiliations could be indicated by spelling variations of one's name. The spelling variations of the name Vanes have included Fane, Ap Fane, Fain, Vane, Vain, Veynes, Vanes and others.

Prominent amongst the family during the late Middle Ages was Francis Fane (1580-1629), 1st Earl of Westmorland (second creation); Mildmay Fane, 2nd Earl of Westmorland (1602-1666), an English nobleman, politician, and writer; Lady Mary Fane (1639-1681) was the daughter of Mildmay Fane, 2nd Earl of Westmorland; Sir Henry Vane the Elder (1589-1655), English courtier, father of Henry Vane the Younger; Sir Henry Vane the Younger (1613-1662), statesman, Puritan, son of Henry Vane the Elder; and his son, Christopher Vane, 1st Baron Barnard (1653-1723), an English peer; George Fane (c. 1616-1663) was an English politician who fought for the...
Another 98 words (7 lines of text) are included under the topic Early Vanes Notables in all our PDF Extended History products and printed products wherever possible.

In Netherlands, the name Vanes is the 513rd most popular surname with an estimated 3,421 people with that name. [3]

Migration of the Vanes family to Ireland

Some of the Vanes family moved to Ireland, but this topic is not covered in this excerpt. More information about their life in Ireland is included in all our PDF Extended History products and printed products wherever possible.

Vanes migration to the United States +

During the latter half of the 19th and the beginning of the 20th century, the people of Wales journeyed to North America to find a new life. They made major contributions to the arts, industry and commerce of both Canada and the United States, and added a rich cultural heritage to their newly adopted societies. A look at the immigration and passenger lists has shown a number of people bearing the name Vanes:

Vanes Settlers in United States in the 17th Century

Vanes Settlers in United States in the 19th Century

Vanes Settlers in Australia in the 19th Century