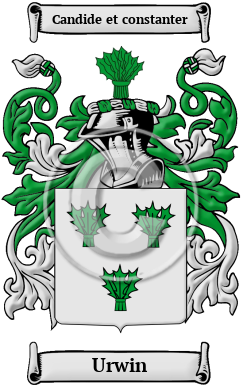 Among the all the peoples of ancient Scotland, the first to use the name Urwin were the Strathclyde-Britons. It was a name for someone who lived in the parish of Irving in the county of Dumfriesshire or from Irvine in Strathclyde. There are a variety of possible origins of the name and we will explore some of them here. One source claims the name was a "descendant of Erewine (sea friend); or one who came from Irvine (green river), in Ayrshire. " [1]

Early Origins of the Urwin family

The surname Urwin was first found in Ayrshire, at Irvine, a parish, in the district of Cunninghame, about 26 miles (W. S. W.) from Glasgow.

Early History of the Urwin family

The variation in the spelling of Medieval names is a result of the lack of spelling rules in the English language prior to the last few hundred years. Before that time, scribes spelled according to sound, often varying the spelling of name within a single document. Urwin has appeared as Irwin, Erwin, Irvine, Irving, Urwin, Erwine, Ervin, Erwing, Ervynn, Ervine, Erwynn, Irwing, Irwryn and many more.

Notable amongst the family at this time was Adam Irvine, Burgess of Irvine in 1455, doubtless derived his surname from Aberdeenshire. Sir Alexander Irvine of Drum (d. 1658), the Royalist, "was descended from William de Irvine, who was armour-bearer to Robert Bruce, and was rewarded for his devoted services by a grant of the forest of Drum, Aberdeenshire, at that time part of a royal forest. A grandson of William de Irvine (Sir Alexander) distinguished himself at the battle of Harlaw (1411), in a hand-to-hand encounter with MacLean of Dowart, general of Donald of the Isles, in which both were slain...
Another 116 words (8 lines of text) are included under the topic Early Urwin Notables in all our PDF Extended History products and printed products wherever possible.

Migration of the Urwin family to Ireland

Some of the Urwin family moved to Ireland, but this topic is not covered in this excerpt.
Another 144 words (10 lines of text) about their life in Ireland is included in all our PDF Extended History products and printed products wherever possible.

Urwin migration to the United States +

Urwin Settlers in United States in the 17th Century

Urwin Settlers in United States in the 19th Century

Urwin Settlers in United States in the 20th Century