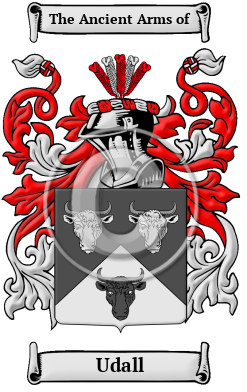 The Udall surname comes from the place name Yewdale in Lancashire, which is derived from the Old English word "yew," a type of tree and the Old Norse "dalr," meaning "valley." [1] Literally, the place name means "the dale where yew-trees grow"[2]

Early Origins of the Udall family

The surname Udall was first found in North West Lancashire at Yewdale. While three distinct sources agree on this origin, one differs. In this case, the author notes that the name could have been Norman in origin implying some of the family at one time emigrated to England. He notes that the Magni Rotuli Scaccarii Normanniae lists Ansgot de Ouvedale (Uvedale) in Normandy 1180-1195. The same source also notes Walder de Hudal in 1198. [3]

Scant records are found today of Yewdale other than one source notes that it is a "valley at the north end of Coniston Lake." [4]

Apparently at one time "a family of Udall, or Wedalle, owned the manor of Chingford Comitis, Essex, in the reign of Elizabeth. " [5]

Early History of the Udall family

Udall has been spelled many different ways. Before English spelling became standardized over the last few hundred years, spelling variations in names were a common occurrence. As the English language changed in the Middle Ages, absorbing pieces of Latin and French, as well as other languages, the spelling of people's names also changed considerably, even over a single lifetime. Many variations of the name Udall have been found, including Udall, Udale, Udall, Udle, Yewdale, Yewdall, Youdale and many more.

Notables of this surname at this time include: Sir William Uvedale (1455-1524), British soldier and courtier, of Wickham, Hampshire, the son and heir of Sir Thomas Uvedale of Wickham and of Titsey, Surrey, High Sheriff of Surrey and Sussex in 1437 and 1464. "The family name appears from the oldest deeds to have been D'Ovedale or D'Ouvedale. Other variations of the name are Uvedall, Uvedail, Vuedall, Udall, Woodall, and Woodhall. A writer in a sixteenth-century manuscript, desirous of identifying the Uvedale family with that of Wodehall, Cumberland, says, 'Thei call the name Woddall, and some call it Udall, and some Wodhall...
Another 108 words (8 lines of text) are included under the topic Early Udall Notables in all our PDF Extended History products and printed products wherever possible.

Udall migration to the United States +

In an attempt to escape the chaos experienced in England, many English families boarded overcrowded and diseased ships sailing for the shores of North America and other British colonies. Those families hardy enough, and lucky enough, to make the passage intact were rewarded with land and a social environment less prone to religious and political persecution. Many of these families became important contributors to the young colonies in which they settled. Early immigration and passenger lists have documented some of the first Udalls to arrive on North American shores:

Udall Settlers in United States in the 17th Century

Udall Settlers in United States in the 18th Century