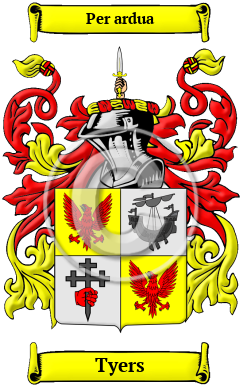 In the Scotland of ancient times, Tyers was a name for a carpenter or wright. The Gaelic form Mac an t-saoir means son of the carpenter. Most historians agree that their earliest habitations were on MacDonald territories on Kintyre. Most legends about their beginnings point to an origin in the Hebrides. From this point on, opinions differ. One legend has the Clan-an-t-Saor (Children of the Carpenter) arriving in Lorne in a galley with a white cow, another says that the galley, set adrift, developed a leak below the water line and the MacDonald Chieftain placed his thumb in the hole to keep the boat afloat. Spotting help at a distance, he cut off his thumb so that he could wave. He was ironically named the Carpenter or MacIntyre. Some claim that the family derived its name from a member of the MacDonalds who was called Cean-tire because of his ownership of lands on the peninsula of Kintyre.

Early Origins of the Tyers family

The surname Tyers was first found in Argyllshire (Gaelic erra Ghaidheal), the region of western Scotland corresponding roughly with the ancient Kingdom of Dál Riata, in the Strathclyde region of Scotland, now part of the Council Area of Argyll and Bute, where according legend, Maurice or Murdock, The Wright, (c.1150) became the first MacIntyre chief as a reward for helping his uncle, Somerled, King of Argyll and the Western Isles.

Early History of the Tyers family

This web page shows only a small excerpt of our Tyers research. Another 181 words (13 lines of text) covering the years 1955, 1991, 1543, 1597 and are included under the topic Early Tyers History in all our PDF Extended History products and printed products wherever possible.

Medieval spelling was at best an intuitive process, and translation between Gaelic and English was no more effective. These factors caused an enormous number of spelling variations in Dalriadan names. In fact, it was not uncommon to see a father and son who spelled their name differently. Over the years, Tyers has been spelled MacIntyre, MacIntire, MacIntre and many more.

Another 50 words (4 lines of text) are included under the topic Early Tyers Notables in all our PDF Extended History products and printed products wherever possible.

Migration of the Tyers family to Ireland

Some of the Tyers family moved to Ireland, but this topic is not covered in this excerpt.
Another 59 words (4 lines of text) about their life in Ireland is included in all our PDF Extended History products and printed products wherever possible.

Tyers migration to the United States +

The hardy Scots who made the crossing settled all along the east coast of North America and in the great west that was just then opening up. At the time of the American War of Independence, many United Empire Loyalists moved north from the American colonies to Canada. Scottish national heritage became better known in North America in the 20th century through highland games and other patriotic events. An examination of immigration records and passenger ship lists revealed that people bearing the name Tyers arrived in North America very early:

Tyers Settlers in United States in the 17th Century

Tyers Settlers in Australia in the 19th Century

Tyers Settlers in New Zealand in the 19th Century

Historic Events for the Tyers family +