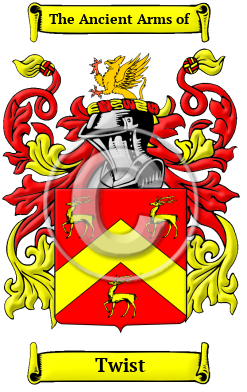 Early Origins of the Twist family

The surname Twist was first found in Northumberland where they held a family seat from very ancient times at Twizel near Coldstream as Lords of the manor, some say before the Norman Conquest in 1066 A.D. One of the first on record was Agnes de Twizel of the county of Berwick who rendered homage in 1296 to King Edward I of England who restored her lands in Berwickshire.

Early History of the Twist family

This web page shows only a small excerpt of our Twist research. Another 142 words (10 lines of text) covering the years 1802, 1700, 1578, 1646, 1787 and 1849 are included under the topic Early Twist History in all our PDF Extended History products and printed products wherever possible.

Notable amongst the family name during their early history was William Twisse (1578-1646), a prominent English clergyman and theologian who became Prolocutor of the Westminster Assembly. "The family name...
Another 28 words (2 lines of text) are included under the topic Early Twist Notables in all our PDF Extended History products and printed products wherever possible.

Migration of the Twist family to Ireland

Some of the Twist family moved to Ireland, but this topic is not covered in this excerpt. More information about their life in Ireland is included in all our PDF Extended History products and printed products wherever possible.

Twist migration to the United States +

Twist Settlers in United States in the 17th Century

Twist Settlers in United States in the 18th Century

Twist Settlers in United States in the 19th Century

Twist Settlers in Australia in the 19th Century

Twist Settlers in New Zealand in the 19th Century