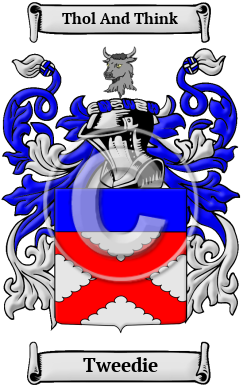 Early Origins of the Tweedie family

The surname Tweedie was first found in Lanarkshire (Gaelic: Siorrachd Lannraig) a former county in the central Strathclyde region of Scotland, now divided into the Council Areas of North Lanarkshire, South Lanarkshire, and the City of Glasgow, where they held a family seat from very ancient times, on the lands of Tweedie in the parish of Stonehouse in Lanarkshire. Even from ancient times the Tweedies had a reputation of being a savage race and were frequently at odds with the Law.

Early History of the Tweedie family

This web page shows only a small excerpt of our Tweedie research. Another 103 words (7 lines of text) covering the years 1296, 1320, 1590, 1630, and 1715 are included under the topic Early Tweedie History in all our PDF Extended History products and printed products wherever possible.

Spelling variations of this family name include: Tweedie, Tweedy, Twedye, Twiddy and others.

More information is included under the topic Early Tweedie Notables in all our PDF Extended History products and printed products wherever possible.

Migration of the Tweedie family to Ireland

Some of the Tweedie family moved to Ireland, but this topic is not covered in this excerpt.
Another 50 words (4 lines of text) about their life in Ireland is included in all our PDF Extended History products and printed products wherever possible.

Tweedie migration to the United States +

Tweedie Settlers in United States in the 18th Century

Tweedie Settlers in United States in the 19th Century

Tweedie Settlers in Australia in the 19th Century

Tweedie Settlers in New Zealand in the 19th Century