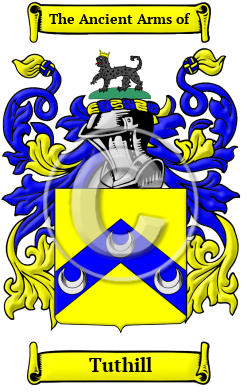 The Tuthill surname comes from the Old Norse personal name "þorkell," made up of the elements "þórr," or "Thor," name of the Scandinavian god of thunder and "ketill," meaning "a cauldron."

Early Origins of the Tuthill family

The surname Tuthill was first found in either Toot Hill, Essex; or Tothill, Lincolnshire and Middlesex; or at Tootle Height, Lancashire. The earliest record of the name was Giolber de Totehille, who was listed as a Knight Templar in 1185. [1]

Early History of the Tuthill family

This web page shows only a small excerpt of our Tuthill research. Another 99 words (7 lines of text) covering the years 1587, 1693, 1649 and are included under the topic Early Tuthill History in all our PDF Extended History products and printed products wherever possible.

Another 42 words (3 lines of text) are included under the topic Early Tuthill Notables in all our PDF Extended History products and printed products wherever possible.

In the United States, the name Tuthill is the 12,499th most popular surname with an estimated 2,487 people with that name. [3]

Migration of the Tuthill family to Ireland

Some of the Tuthill family moved to Ireland, but this topic is not covered in this excerpt.
Another 86 words (6 lines of text) about their life in Ireland is included in all our PDF Extended History products and printed products wherever possible.

Tuthill migration to the United States +

Tuthill Settlers in United States in the 17th Century

Tuthill Settlers in United States in the 20th Century

Tuthill Settlers in Australia in the 19th Century

Tuthill Settlers in New Zealand in the 19th Century

Tuthill Settlers in West Indies in the 17th Century