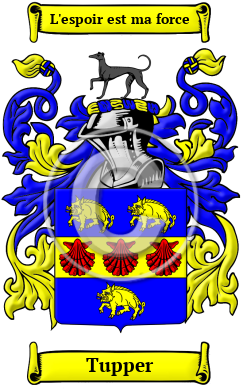 Early Origins of the Tupper family

The surname Tupper was first found in Saxony where they were an ancient family "well known in the literature of Germany and France." [1] The family held a family seat at Thuringe in later years. The family became dispersed when they were beset by the religious conflicts of the fifteenth and sixteenth centuries. Under Charles V of France the main branch were described as Lutherans or "tout-perd" which in the Netherlands became Toupard. From this source, "the principal branch went to Guernsey in 1548." [1] Another source follows this timeline but adds "A branch of the family settled in England at Sandwich, Kent, whence another descendant, Thomas Tupper, went to America in 1635, and helped to found the town of Sandwich, Massachusetts in 1637." [2] Yet another source claims a completely different origin of the name. In this case, the name originated at "York in 1365 [when] men were employed in beating and ramming (tupant) the earth and mud, strengthened with straw, with rammers (tuppis) and great hammers. As the rams were called tups, these workmen may well have been named tuppers." [3] The latter source may have some credence as early rolls revealed: Robert Tophird in the Subsidy Rolls of Yorkshire in 1327, [3] and Willelmus Tuphird in the Yorkshire Poll Tax Rolls of 1379. [4]

Early History of the Tupper family

This web page shows only a small excerpt of our Tupper research. Another 140 words (10 lines of text) covering the years 1548, 1821, 1887 and 1896 are included under the topic Early Tupper History in all our PDF Extended History products and printed products wherever possible.

Spelling variations of this family name include: Topper, Toppfer, Tupper, Touper, Toper and others.

More information is included under the topic Early Tupper Notables in all our PDF Extended History products and printed products wherever possible.

In the United States, the name Tupper is the 8,428th most popular surname with an estimated 2,487 people with that name. [5]

Tupper migration to the United States +

Tupper Settlers in United States in the 17th Century

Tupper Settlers in United States in the 19th Century

Tupper Settlers in Canada in the 19th Century

Tupper Settlers in New Zealand in the 19th Century

Tupper Settlers in West Indies in the 17th Century

Historic Events for the Tupper family +