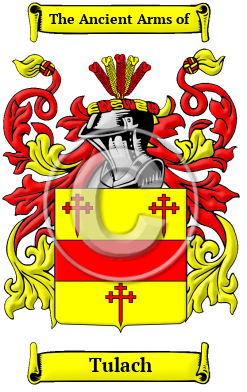 The Tulach surname comes the name of a place called Tulloch, on the Firth of Cromarty. The place name comes from the Gaelic word "tulach," meaning a "hillock." Tulach is classed as a habitation surname, as it derived from an existing place name.

Early Origins of the Tulach family

The surname Tulach was first found in Ross-shire (Gaelic: Siorrachd Rois) a former county, now part of the Council Areas of Highland and Western Isles in Northern Scotland, which emerged from the Gaelic lordship of the Earl of Ross, where they held a family seat from very ancient times, whereas the Tullos variant is from the area of Torry, a suburb of Aberdeen and takes its name from the Vale of Tullos which lies between Tullos Hill and Torry Hill.

Early History of the Tulach family

Spelling variations of this family name include: Tulloch, Tullo, Tulloh, Tullack, Tullagh and others.

Migration of the Tulach family