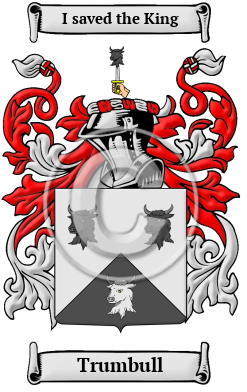 The ancestors of the bearers of the Trumbull surname lived among the Boernicians, an ancient Scottish tribe. It is a name for a man named Rule (sometimes Ruel) who saved King Robert the Bruce at Stirling Park from a charging bull by turning the bull's head.

Early Origins of the Trumbull family

The surname Trumbull was first found in Roxburghshire. Referring to the aforementioned Rule reference, there was a noble family of Rule, which derived its name from the Water of Rule, an affluent of the Teviot.

Early History of the Trumbull family

Before the first dictionaries and printing presses went into use in the last few hundred years, spelling, particularly of names, was a largely intuitive matter. Consequently, many spelling variations occur in even the simplest names from the Middle Ages. Trumbull has been spelled Turnbull, Turnball, Trimble, Trimbell, Trumbell, Trumbill, Turnbul and many more.

Notable amongst bearers of this family name during their early history was William Turnbull (d. 1454), Bishop of Glasgow, who procured from the pope a charter to establish a university in the city...
Another 32 words (2 lines of text) are included under the topic Early Trumbull Notables in all our PDF Extended History products and printed products wherever possible.

In the United States, the name Trumbull is the 14,451st most popular surname with an estimated 2,487 people with that name. [2]

Migration of the Trumbull family to Ireland

Some of the Trumbull family moved to Ireland, but this topic is not covered in this excerpt.
Another 50 words (4 lines of text) about their life in Ireland is included in all our PDF Extended History products and printed products wherever possible.

Trumbull migration to the United States +

The east coasts of the United States and Canada are still populated by many of the descendents of the Boernician-Scottish families who made that great crossing. They distributed themselves evenly when they first arrived, but at the time of the War of Independence those who remained loyal to England went north to Canada as United Empire Loyalists. This century, many of their ancestors have recovered their past heritage through highland games and other Scottish functions in North America. Many of these hardy settlers went on to make important contributions to the emerging nations in which they landed. Investigation of the origins of family names on the North American continent has revealed that many immigrants bearing the name Trumbull or a variant listed above:

Trumbull Settlers in United States in the 17th Century

Historic Events for the Trumbull family +