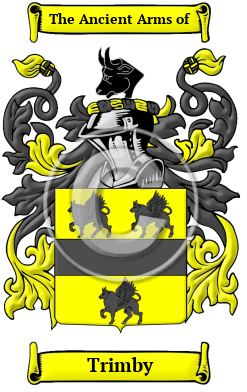 According to family tradition, the Trimby surname comes from when a member of the Rule family saved the life of King Robert the Bruce at Stirling Park from a charging bull by turning the bull's head. The grateful King decreed that in commemoration of the brave act the new name of the family would be Turnbull, and granted them an area of land then known as Bedrule. Other Etymology suggests that the name comes from the Old English Trumbald, meaning "strongly bold."

Early Origins of the Trimby family

The surname Trimby was first found in Roxburghshire where they held a family seat from early times and their first records appeared on the early census rolls taken by the early Kings of Scotland to determine the rate of taxation of their subjects.

Early History of the Trimby family

Another 48 words (3 lines of text) are included under the topic Early Trimby Notables in all our PDF Extended History products and printed products wherever possible.

Migration of the Trimby family to Ireland

Some of the Trimby family moved to Ireland, but this topic is not covered in this excerpt.
Another 74 words (5 lines of text) about their life in Ireland is included in all our PDF Extended History products and printed products wherever possible.

Trimby migration to the United States +

Trimby Settlers in United States in the 18th Century

Trimby Settlers in United States in the 19th Century

Trimby Settlers in United States in the 20th Century

Trimby Settlers in Australia in the 19th Century