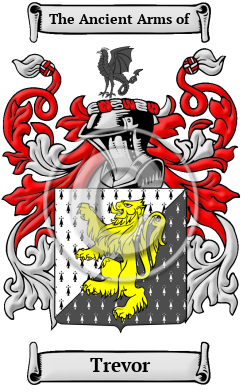 The Trevor family name comes from the name of either of the Welsh settlements called Trevor in Denbigh and Anglesey. As such, the surname Trevor belongs to the category of habitation names, which are derived from pre-existing names for towns, villages, parishes, or farmsteads.

Early Origins of the Trevor family

The surname Trevor was first found in Herefordshire, where Tudor Trevor was Lord of Hereford, Wittington, and both Maelors, founder of the Tribe of the Marches. He was son of Ynyr Ap Cadforch, Lord of both Maelors in Powys, a Baron of Powys.

Trevor Hall is a large grade mansion standing in 85 acres (35 hectares) of parkland at Trevor, near Llangollen, Denbighshire, Wales. The estate has been in the family since medieval times and was at one time the home of Bishop John Trevor (died 1357.)

There was always a close relationship with people of Wales and Cornwall; so it is not surprising to find an early reference to the family there. "The manor of Trevear [in the parish of Gorran] was formerly the property, and the mansion the residence of a family of this name. Tonkin says, that the mansion of Sir Henry Trevear was standing so late as the year 1736. From this family it passed to the Scawens, and it is now the property of Thomas Graham, Esq." [1]

Early History of the Trevor family

Although there are comparatively few Welsh surnames, they have a great many spelling variations. Variations of Welsh names began almost immediately after their acceptance within Welsh society. In the Middle Ages, it was up to priests and the few other people that recorded names in official documents to decide how to spell the names that they heard. Variations that occurred because of improper recording increased dramatically as the names were later transliterated into English. The Brythonic Celtic language of Wales, known by natives as Cymraeg, featured many highly inflected sounds that could not be properly captured by the English language. Spelling variations were, however, also carried out according to an individual's design: a branch loyalty within the family, a religious adherence, or even patriotic affiliations were all indicated by the particular variation of one's name. The spelling variations of the name Trevor have included Trevor, Trefor and others.

Migration of the Trevor family to Ireland

Some of the Trevor family moved to Ireland, but this topic is not covered in this excerpt.
Another 132 words (9 lines of text) about their life in Ireland is included in all our PDF Extended History products and printed products wherever possible.

Trevor migration to the United States +

Many people from Wales joined the general migration to North America in the 19th and 20th centuries, searching for land, work, and freedom. Like the many other immigrants from the British Isles, they made a significant contribution to the development of Canada and the United States. The Welsh and their descendents added a rich cultural tradition to the newly developed towns, cities, and villages. An investigation of the immigration and passenger lists has revealed a number of people bearing the name Trevor:

Trevor Settlers in United States in the 17th Century

Trevor Settlers in United States in the 18th Century

Trevor Settlers in United States in the 19th Century

Trevor Settlers in United States in the 20th Century

Trevor Settlers in Australia in the 19th Century