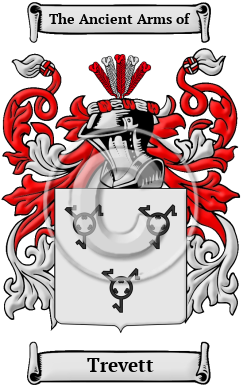 Early Origins of the Trevett family

The surname Trevett was first found in Somerset where one of the first records of the family was found in the year 1206 when Hugh Truet was recorded with estates in that shire.

Early History of the Trevett family

Distinguished members of the family include Sir Thomas Trivet (d. 1388), was an English soldier, "a member of a Somerset family, to which Nicholas Trivet, the historian, and his father, Sir Thomas Trivet, the judge, probably belonged...
Another 36 words (3 lines of text) are included under the topic Early Trevett Notables in all our PDF Extended History products and printed products wherever possible.

Trevett migration to the United States +

Trevett Settlers in United States in the 17th Century

Trevett Settlers in United States in the 18th Century

Historic Events for the Trevett family +