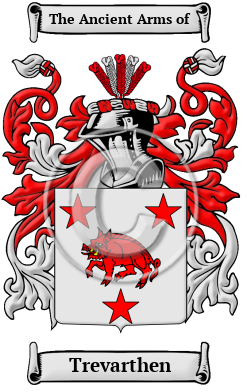 The ancient and distinguished surname Trevarthen comes from the southwestern county of Cornwall. The name is made up of two elements: the Cornish "tre," meaning "homestead, settlement," and the Welsh personal name "Arthen." This name was borne by places in the parishes of St. Hilary and Newlyn East; thus, it is likely that the original bearer of the surname came from one of these places.

Early Origins of the Trevarthen family

The surname Trevarthen was first found in Cornwall, where they held a family seat as Lords of the Manor of Trevarthian. "The manor of Trevarthian, [in the parish of Newlyn, Cornwall] was, in the early periods of its history, the property of a family to whom it gave its name; by whose heiress it was carried to the Reskymers. Tonkin says, that Walter de Treverbyn, who was sheriff of Cornwall in the reign of Henry III. was of this place." [1]

Early History of the Trevarthen family

This web page shows only a small excerpt of our Trevarthen research. Another 101 words (7 lines of text) are included under the topic Early Trevarthen History in all our PDF Extended History products and printed products wherever possible.

Spelling variations of this family name include: Trevarthen, Trevarthian, Trevarthan and others.

More information is included under the topic Early Trevarthen Notables in all our PDF Extended History products and printed products wherever possible.

Trevarthen migration to the United States +

Trevarthen Settlers in United States in the 19th Century

Trevarthen Settlers in United States in the 20th Century

Trevarthen Settlers in New Zealand in the 19th Century

Historic Events for the Trevarthen family +