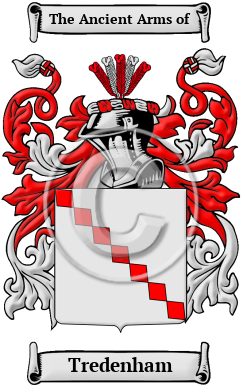 Early Origins of the Tredenham family

The surname Tredenham was first found in Cornwall where they held a family seat as Lords of the Manor of Tredenham in the parish of Probus. Cornwall was a land set apart, a land of mystique and quaint customs, more strongly related to Brittany and Wales than to England. They were settled at that place in 1189. Many lines were descended from Sir Joseph Tredenham of Tregonan.

"There are strong reasons for believing them to have been an offshoot of the baronial family of Dinham of Cornwall and Devon. The prefix 'Tre' in the Cornish tongue signifies, like the Saxon 'tun,' an enclosure, or fenced estate. It is therefore quite possible that a cadet of Dinham or Denham may have given the name of Tre-Denham, or 'Denham's estate' to his lands, and afterwards his descendants took their surname from those lands. A remarkable confirmation of this notion is, that both families bear in their coat armour fusils (which are far from common in heraldry.)" [1]

Early History of the Tredenham family

Notable amongst the family at this time was Sir William Tredenham (c.1638-1662), an English politician from Philly, Cornwall who sat in the House of Commons between 1659 and 1662. John Tredenham (1668-1710), was an English politician, the eldest surviving...
Another 38 words (3 lines of text) are included under the topic Early Tredenham Notables in all our PDF Extended History products and printed products wherever possible.

Migration of the Tredenham family

Some of the first settlers of this family name or some of its variants were: settlers who were recorded from the mid 17th century in the great migration from Europe to the New World. Many fisherman from the coastal villages of Cornwall migrated to the eastern seaboard from Newfoundland, to Maine, to Florida, and to the Leeward Islands..