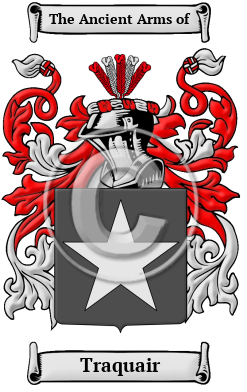 Early Origins of the Traquair family

The surname Traquair was first found in Peeblesshire (Gaelic: Siorrachd nam Pùballan), former county in South-central Scotland, in the present day Scottish Borders Council Area, where they held a family seat on the lands of Traquair in the parish of Traquair from very ancient times. Although Magistrate Alan de Traquair was the first on record in 1250 it can be assumed that the lands were held by the family at least 100 years before. Following the pattern of settlers in the district, many grants were made by King David of Scotland to his Norman friends who moved north after the Barons War with King Stephen of England in 1137. Similarly, it was the Norman custom for the second son to adopt the surname of his estates, hence Traquair.

Early History of the Traquair family

This web page shows only a small excerpt of our Traquair research. Another 50 words (4 lines of text) covering the years 1265, 1315 and 1618 are included under the topic Early Traquair History in all our PDF Extended History products and printed products wherever possible.

More information is included under the topic Early Traquair Notables in all our PDF Extended History products and printed products wherever possible.

Traquair migration to the United States +

Traquair Settlers in United States in the 18th Century

Traquair Settlers in New Zealand in the 19th Century