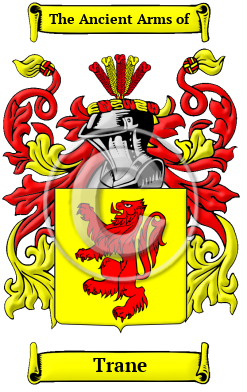 Early Origins of the Trane family

The surname Trane was first found in Northumberland and Durham where they held a family seat from very ancient times, Lords of the manor of Streatlam, Stewards of Richmondshire (now Yorkshire and Durham,) and were closely associated with the ancient Percies, Earls of Northumberland, and the Royal Balliol family.

Stainton with Streatlam in Durham was an ancient family seat. "This hamlet at an early period belonged to the Traynes, lords of Streatlam; and was acquired, by marriage with the heiress of Trayne, by Sir Adam Bowes. The estate afterwards became separated from the Streatlam property, but was re-united to it in 1526." [1]

Further to the north in Scotland, "the first records of this surname are all associated with the burgh of Irvine. Tran was bailie of Irvine, 1540, Thomas Tran was charter witness there, 1455, Mariot Trane was repledged to liberty of the burgh in 1460." [2]

Early History of the Trane family

Spelling variations of this family name include: Train, Trayne, Trane and others.

Notable amongst the family name during their early history was William Trayne, shipowner in Irvine in 1557, and another William Trane in Irrwine, 1583. Patrick Trane, was merchant burgess of Glasgow in 1653, and...
Another 34 words (2 lines of text) are included under the topic Early Trane Notables in all our PDF Extended History products and printed products wherever possible.

Trane migration to the United States +

Trane Settlers in United States in the 17th Century

Trane Settlers in Australia in the 19th Century

Historic Events for the Trane family +