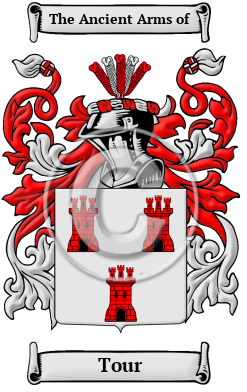 Early Origins of the Tour family

The surname Tour was first found in Devon where they held a family seat as Lords of the Manor. The family name was first referenced in the 12th century when they held estates in that shire. They were of the great Norman family of Martin de Tours from Tour near Bayeux. [1]

The Sire de Tour conquered Cameys in Wales and became the Lord Marcher of South Wales. His sons either took the name FitzMartin or Tour, sometimes Tower. He built the Benedictine Abbey of St. Dogmael's and, of course, his great Castle at Newport, where the ruins still exist.

The family was granted vast estates in Devon, Somerset, and Dorset. Torre Abbey is today a historic building and art gallery in Torquay, Devon. It was founded in 1196 as a monastery for Premonstratensian canons.

Later, some of the family went north to Syndale in the West Riding of Yorkshire as evidenced by the following: "The township comprises by computation 1300 acres, and is chiefly the property of James Whitwell Torre, Esq., whose seat, Snydale Hall, is a handsome residence." [2]

Another source notes: "probably the family of Torr came originally from the adjacent county of Warwickshire. The ancient and honourable family of Torre or De Turre, that resided for many generations at Westwood, near Haxey, Lincolnshire, came in the reign of Henry IV. from Warwickshire. " [3]

Much further to the north in Scotland, "there were old lands named Torr which formed part of the barony of Ballinbreich, Fife, in 1517. Matthew de Torre de Inuerdouet witnessed a transaction between Serlo de Lascelis and the prior of St. Andrews, 1288. Thomas de la Tour of Ayrshire rendered homage in 1296. His seal bears a castle with 3 towers. " [4]

Early History of the Tour family

This web page shows only a small excerpt of our Tour research. Another 89 words (6 lines of text) covering the years 1182, 1242, 1357, 1545, 1649 and 1699 are included under the topic Early Tour History in all our PDF Extended History products and printed products wherever possible.

Spelling variations of this family name include: Tour, Tor, Torr, Torre, Thor, Thore, Thour and others.

Outstanding amongst the family at this time was James Torre (1649-1699), English antiquary and genealogist, the son of Gregory Torre by his wife Anne. "Torre's family came originally from Warwickshire, but since the time of Henry IV...
Another 36 words (3 lines of text) are included under the topic Early Tour Notables in all our PDF Extended History products and printed products wherever possible.

Migration of the Tour family