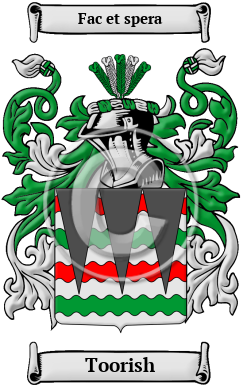 Toorish is an ancient Scottish name that was first used by the Strathclyde-Briton people of the Scottish/English Borderlands. It is a name for someone who lived in Renfrrewshire. This place-name may also be derived from the Old English words caeld, which means cold, and welle, which means well, and indicates that the original bearer lived near a well that gave cold water.

Early Origins of the Toorish family

The surname Toorish was first found in Renfrewshire (Gaelic: Siorrachd Rinn Friù), a historic county of Scotland, today encompassing the Council Areas of Renfrew, East Renfrewshire, and Iverclyde, in the Strathclyde region of southwestern Scotland, at the Caldwell Tower, a mansion and old estate that dates back to 1294.

The current Caldwell Tower stands on a mound, and is a small, free-standing tower that was probably built in the 16th century.

It was fully restored in 2011 with the addition of a small extension. Caldwell is also a village and civil parish in the Richmondshire district of North Yorkshire.

"The old family of the name appears to have ended in the direct line in an heiress in the fifteenth century. In 1342 there is an entry of the fee of William de Caldwell. Robert Cauldwell was a merchant in the service of Sir John of Montgomery, 1405." [1]

The Caudle variant may be related to a thickened and sweetened alcoholic hot drink so named. It was popular in the Middle Ages for its supposed medicinal properties and dates back to at least 1297.

Further to the south in the English county of Yorkshire, the Yorkshire Poll Tax Rolls of 1379 listed: Johannes de Coldwell; and Thomas de Coldwele. [2]

Early History of the Toorish family

Prior to the first dictionaries, scribes spelled words according to sound. This, and the fact that Scottish names were repeatedly translated from Gaelic to English and back, contributed to the enormous number of spelling variations in Scottish names. Toorish has been spelled Caldwell, Coldwell, Caldwill, Cauldwell, Cauldwill, Cawldwell, Guildwell, Calewell, Caldewell and many more.

Notable amongst the family at this time was Blessed John Fenwick, born John Caldwell (1628-1679), an English Jesuit, executed at the time of the Popish Plot, a Catholic martyr, beatified in 1929 by Pope Pius XI. Richard Caldwall (1505?-1584), was an English physician, born in Staffordshire about 1505. "He was educated at Brasenose, graduated as B.A. in...
Another 56 words (4 lines of text) are included under the topic Early Toorish Notables in all our PDF Extended History products and printed products wherever possible.

Migration of the Toorish family to Ireland

Some of the Toorish family moved to Ireland, but this topic is not covered in this excerpt.
Another 60 words (4 lines of text) about their life in Ireland is included in all our PDF Extended History products and printed products wherever possible.

Migration of the Toorish family

In such difficult times, the difficulties of raising the money to cross the Atlantic to North America did not seem so large compared to the problems of keeping a family together in Scotland. It was a journey well worth the cost, since it was rewarded with land and freedom the Scots could not find at home. The American War of Independence solidified that freedom, and many of those settlers went on to play important parts in the forging of a great nation. Among them: Archibald Caldwel, a Scottish prisoner sent to America in 1685; John Caldwell, a bonded passenger, who came to America in 1693; Charles Caldwell, who arrived in New England in 1718.