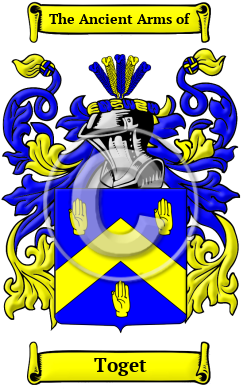 The Toget surname was taken on from any of several places so named, especially in Western France.

Early Origins of the Toget family

The surname Toget was first found in Notre Dame du Touchet, near Mortaine, in Normandy. "The ruins of the old castle are still visible near the parish church: and the race of its ancient possessors is not extinct." [1]

"In 1082 Ursinus de Touchet was granted lands to the Church of St. William, Maortaine." [2]

"The family of Touchet," says Collins, "hath been of great note, and came in with William the Conqueror, as is very evident, the name being on the Roll of Battle Abbey and in the Chronicles of Normandy." Its representative in the martial reign of Edward III. was Sir John Touchet, who married Joan, eldest daughter and eventually sole heir of James, Lord Audley of Heleigh, and thus secured to his descendants the inheritance of the ancient Barony of Audley. [3]

Toget appears on the Roll of Battle Abbey, but was later Anglicized as "Tuchet." [1] The first record of the family in ancient Britain was Joceline Touchet who was seated in Cheshire temp. William I (during the reign of William I, the Conqueror.) He was father of Henry and his son, Henry was granted the village of Tattenhall by Ralph Gernons, the Earl of Chester. [2]

"Audley [in Staffordshire] gives the title of Baron to the family of Touchet." [4]

"The family of Tuchet, or Touchet, is very ancient in [Somerset]. William was summoned to Parliament as the first Baron Audley from 1299 to 1306." [5]

Early History of the Toget family

Notable amongst the family in this period was James Touchet seventh Baron Audley (1465?-1497), descended from Adam de Aldithley or Audley, who lived in the reign of Henry I, and is considered the first Baron Audley or Aldithley. James Touchet Baron Audley of Hely or Heleigh, third Earl of Castlehaven (1617?-1684), was the eldest son and heir of Mervyn, lord Audley, second earl of Castlehaven...
Another 64 words (5 lines of text) are included under the topic Early Toget Notables in all our PDF Extended History products and printed products wherever possible.

Migration of the Toget family