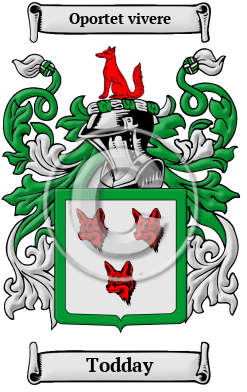 The name Todday is derived from the Northern Middle English word "tod(de)," which meant fox.

Early Origins of the Todday family

The surname Todday was first found in Norfolk where Hugo, Ardin Tod was first listed 1168-1175 and later again in Oxfordshire in 1225. A few years later, Richard Todd was found in Northumberland in 1231 and Richard le Todde was found in the Subsidy Rolls for Worcestershire in 1275. [2]

Early History of the Todday family

Notable amongst the family name during their early history was Hugh Todd (1658?-1728), English author, born at Blencow, Cumberland. He was the son of Thomas Todd, rector of Hutton in the Forest in the same county, who was ejected by Cromwell's sequestrators and imprisoned at Carlisle. On 4 July 1677, and becoming taberdar of the college. In the following year, on 23 Dec., he was elected a fellow of University College, whence he proceeded M.A. on 2...
Another 77 words (6 lines of text) are included under the topic Early Todday Notables in all our PDF Extended History products and printed products wherever possible.

Migration of the Todday family to Ireland

Some of the Todday family moved to Ireland, but this topic is not covered in this excerpt.
Another 61 words (4 lines of text) about their life in Ireland is included in all our PDF Extended History products and printed products wherever possible.

Migration of the Todday family