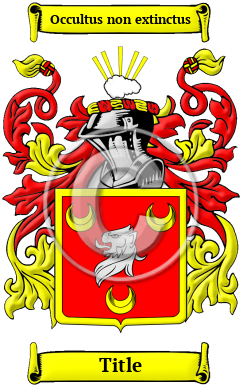 Early Origins of the Title family

The surname Title was first found in Haddingtonshire where they were descended from the distinguished family of Seaton who were granted their lands by King Malcom Canmore of Scotland (1058-1093). "The Scottish family of this name are stated to be a younger branch of the noble house of Seton. The ancestor is said to have fled into France temp. James IV., in consequence of having slain a gentleman in a sudden quarrel at a hunting match, and there to have adopted, for concealment, the name of Tytler. His two sons, bearing the same name, returned to Scotland with Queen Mary. " [1] While this exciting story is indeed of interest, most believe that it is improbable. The Hundredorum Rolls of 1273, list: Richard le Titteler; Symon le Titteler; and Symon le Tuteler all in Suffolk. [2]

Early History of the Title family

Spelling variations of this family name include: Tytler, Titler, Tattler, Tatler and others.

More information is included under the topic Early Title Notables in all our PDF Extended History products and printed products wherever possible.

Migration of the Title family

Some of the first settlers of this family name or some of its variants were: Benjamin Tytler, who arrived in New York in 1823.