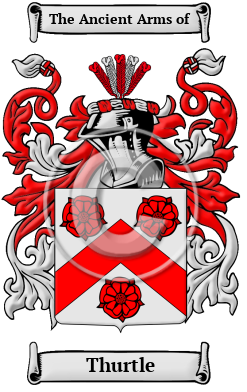 The Thurtle surname is derived from an Old Norse personal name, which was in common use throughout England during the Middle Ages.

Early Origins of the Thurtle family

The surname Thurtle was first found in Yorkshire where the family name was first referenced in the 11th century when they held estates in that shire. [1]

Thurkill, Thorkill or Turgesius (d. 845), was the Danish king of North Ireland and presumed to have been the son of Harold Harfagr as Snorri Sturleson. "He has, however, with more probability been identified with Ragnar Lodbrok, the half-mythical king of Denmark and Norway. As Thurkill he arrived in Ireland with a royal fleet in 832. He took Dublin in the same year, and afterwards assumed the government of all the northmen in Ireland. A few years later, perhaps in 841, Thurkill drove out the abbot of Armagh and assumed the abbacy. in 845, he was taken prisoner by Malachy, then king of Meath (afterwards king of Ireland), and drowned in Loch Owel in what is now Westmeath. " [2]

Roger de Thurkilbi (d. 1260), was an early English judge, the son and heir of Thomas de Thurkilbi, who took his name from a hamlet in the parish of Kirby Grindalyth in the East Riding of Yorkshire. [2]

Early History of the Thurtle family

More information is included under the topic Early Thurtle Notables in all our PDF Extended History products and printed products wherever possible.

Migration of the Thurtle family