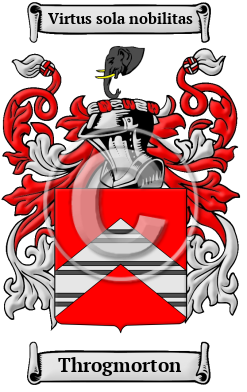 The ancestors of the Throgmorton surname lived among the ancient Anglo-Saxon culture. The name comes from when they lived in Throckmorton (Throckmorten) in Worcestershire. The village dates back to 1176 when it was first listed as Trochemerton and possibly meant "farmstead by a pool with a beam bridge," from the Old English words "troc" + "mere" + "tun." [1]

Early Origins of the Throgmorton family

The surname Throgmorton was first found in Worcestershire at Throckmorton, a chapelry, in the parish of Fladbury, union of Pershore, Middle division of the hundred of Oswaldslow "where John de Trockemerton, the supposed ancestor of this family, was living about the year 1200. From this John descended, after many generations, another 'John Throkmerton,' who was according to Leland, 'the first settler up of his name to any worship in Throckmerton village." [2]

Early History of the Throgmorton family

Before English spelling was standardized a few hundred years ago, spelling variations of names were a common occurrence. Elements of Latin, French and other languages became incorporated into English through the Middle Ages, and name spellings changed even among the literate. The variations of the surname Throgmorton include Throckmorton, Throgmortond, Throggmorton and many more.

Notables of the family at this time include Sir John Throckmorton or Throgmorton (d. 1445), Under-Treasurer of England, the son of Thomas Throgmorton of Fladbury, Worcestershire; Sir Nicholas Throckmorton, (c.1515-1571), English diplomat and politician; Francis Throckmorton (1554-1584), nephew of Sir Nicholas and a conspirator against Queen Elizabeth I; Sir William Throckmorton, 1st Baronet of Tortworth (c. 1579-1628); Sir...
Another 58 words (4 lines of text) are included under the topic Early Throgmorton Notables in all our PDF Extended History products and printed products wherever possible.

Throgmorton migration to the United States +

Throgmorton Settlers in United States in the 17th Century

Throgmorton Settlers in United States in the 18th Century

Throgmorton Settlers in Canada in the 18th Century