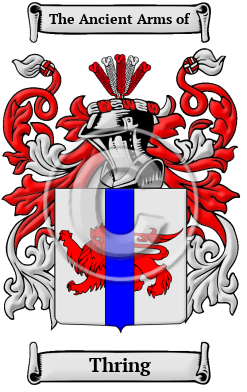 Early Origins of the Thring family

Early History of the Thring family

This web page shows only a small excerpt of our Thring research. Another 55 words (4 lines of text) covering the years 1161, 1201, 1668, 1680, 1688 and 1682 are included under the topic Early Thring History in all our PDF Extended History products and printed products wherever possible.

Notable amongst the family name during their early history was Thomas Dring (died 1668), a London publisher and bookseller who primarily specialized in the publication of law books, but also issued works in a range of subjects including English Renaissance drama. Dring issued volumes of poetry by...
Another 46 words (3 lines of text) are included under the topic Early Thring Notables in all our PDF Extended History products and printed products wherever possible.

Thring Settlers in Australia in the 19th Century

Thring Settlers in New Zealand in the 19th Century