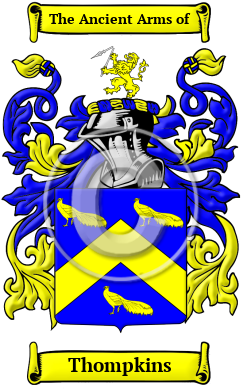 The distinguished surname Thompkins is of English origin. It is derived from the first name "Tom," the popular diminutive of the name "Thomas," and, when combined with the Medieval suffix of endearment "kin," means "son of dear little Tom."

Early Origins of the Thompkins family

The surname Thompkins was first found in Herefordshire, where they held a family seat from ancient times and were Lords of the manor of Monington. "This parish, which is situated on the river Wye, and on the road from Hereford to Hay, comprises by computation 1000 acres." [1]

Later the family was also found in Buckinghamshire where "the name of Tompkins occurred in Soulbury in the 16th century. Nathaniel Tomkins, Esq., who married a Miss Waller in 1624, attained notoriety from his connection with the Waller plot." [2]

Early History of the Thompkins family

Spelling variations of this family name include: Tompkins, Tomkins, Tomkyns, Thomkins, Thompkins and others.

In the United States, the name Thompkins is the 5,801st most popular surname with an estimated 4,974 people with that name. [3]

Migration of the Thompkins family to Ireland

Some of the Thompkins family moved to Ireland, but this topic is not covered in this excerpt.
Another 51 words (4 lines of text) about their life in Ireland is included in all our PDF Extended History products and printed products wherever possible.

Thompkins migration to the United States +

Thompkins Settlers in United States in the 17th Century

Thompkins Settlers in United States in the 19th Century

Thompkins Settlers in Canada in the 18th Century

Thompkins Settlers in New Zealand in the 19th Century