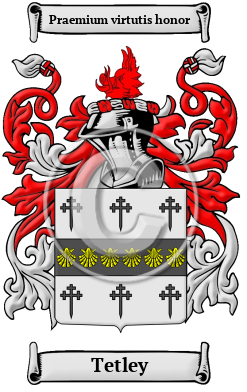 The name Tetley belongs to the early history of Britain, it's origins lie with the Anglo-Saxons. It is a product of their having lived in the village of Tetley found in the counties of Lancashire and Cheshire. Tetley is a topographic surname, which was given to a person who resided near a physical feature such as a hill, stream, church, or type of tree. During the Middle Ages, as society became more complex, individuals needed a way to be distinguishable from others. Toponymic surnames were developed as a result of this need. Various features in the landscape or area were used to distinguish people from one another. In this case the surname Tetley was originally derived from the Old English personal name Taeta from the Old Norse word Teitr meaning cheerful and the Old English word leah menaing wood clearing. In this case the original bearers of the surname Tetley were named due to their close proximity to Taeta's wood clearing.

Early Origins of the Tetley family

The surname Tetley was first found in Shropshire where they held a family seat from very ancient times, before and after the Norman Conquest of 1066.

Early History of the Tetley family

This web page shows only a small excerpt of our Tetley research. Another 96 words (7 lines of text) are included under the topic Early Tetley History in all our PDF Extended History products and printed products wherever possible.

Until the dictionary, an invention of only the last few hundred years, the English language lacked any comprehensive system of spelling rules. Consequently, spelling variations in names are frequently found in early Anglo-Saxon and later Anglo-Norman documents. One person's name was often spelled several different ways over a lifetime. The recorded variations of Tetley include Tetley, Tetlow, Tetlaw, Titley and others.

More information is included under the topic Early Tetley Notables in all our PDF Extended History products and printed products wherever possible.

Tetley migration to the United States +

Thousands of English families boarded ships sailing to the New World in the hope of escaping the unrest found in England at this time. Although the search for opportunity and freedom from persecution abroad took the lives of many because of the cramped conditions and unsanitary nature of the vessels, the opportunity perceived in the growing colonies of North America beckoned. Many of the settlers who survived the journey went on to make important contributions to the transplanted cultures of their adopted countries. The Tetley were among these contributors, for they have been located in early North American records:

Tetley Settlers in United States in the 19th Century

Tetley Settlers in United States in the 20th Century

Tetley Settlers in Canada in the 20th Century

Tetley Settlers in Australia in the 19th Century