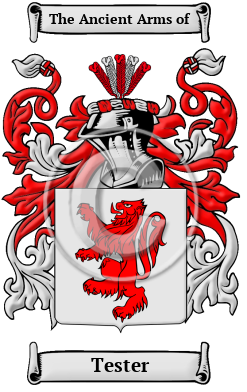 Early Origins of the Tester family

The surname Tester was first found in Oxfordshire where the name is more often than not, thought to have been derived from an early French baptismal name Testard which is found in the Pipe Rolls of 1131. [1]

By the time of the Hundredorum Rolls of 1273, the name was somewhat scattered: Henry Testard, Huntingdonshire; Robert Testard, Suffolk and Ralph Testard, Yorkshire. [3]

As if to attest the French influence, one noted author states: "A family of this name in Ballater, Aberdeenshire, are said to be descended from a Frenchman who was 'taster' to Mary, Queen of Scots, whom he accompanied from France. If this is correct the name may be from Ancient French tester, testar, assayer. More likely, however, the name is same as Testard. " [4]

Early History of the Tester family

More information is included under the topic Early Tester Notables in all our PDF Extended History products and printed products wherever possible.

In the United States, the name Tester is the 10,018th most popular surname with an estimated 2,487 people with that name. [5]

Tester migration to the United States +

Tester Settlers in United States in the 19th Century

Tester Settlers in Australia in the 19th Century

Tester Settlers in New Zealand in the 19th Century

Historic Events for the Tester family +