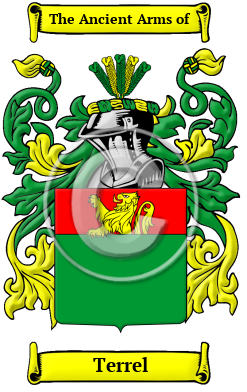 Early Origins of the Terrel family

The surname Terrel was first found in Ross-shire (Gaelic: Siorrachd Rois) a former county, now part of the Council Areas of Highland and Western Isles in Northern Scotland, which emerged from the Gaelic lordship of the Earl of Ross, where they held a family seat on the lands of Tarrel in the barony of Tarbat. From early times they were a sept of the Ross Clan and later had close ties with the McIntoshes. However, they were a fierce and warlike Clan, and it is unlikely that their strength called for great allegiances with a larger Clan. They followed the Earls of Ross.

Early History of the Terrel family

More information is included under the topic Early Terrel Notables in all our PDF Extended History products and printed products wherever possible.

Terrel migration to the United States +

Terrel Settlers in United States in the 18th Century

Terrel Settlers in Australia in the 19th Century