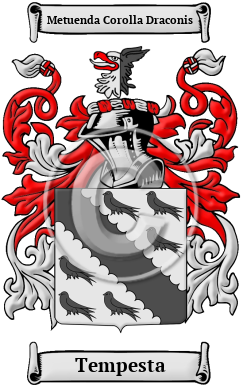 The proud Norman name of Tempesta was developed in England soon after Norman Conquest of England in 1066. It was name for a person with a quick or furious temper. The name is a metaphor derived from the Old French word tempeste, meaning storm. A broad and miscellaneous class of surnames, nickname surnames referred to a characteristic of the first person who used the name. They can describe the bearer's favored style of clothing, appearance, habits, or character. "The name is difficult to account for: it may have reference to some storm which the first bearer encountered." [1]

Early Origins of the Tempesta family

The surname Tempesta was first found in Yorkshire where the this ancient family is traced to Roger Tempest [1], "progenitor of this the oldest and most distinguished of the Craven families now surviving. That this man was a Norman the name will not permit us to doubt; that he was a dependant of Roger of Poitou is extremely probable; that he was at all events possessed of Bracewell (in Craven) early in the reign of Henry I., is absolutely certain." [2]

Later, the chapelry of Tong, in the West Riding of Yorkshire was home to another branch of the family. "The manor, including the hamlets of Cutler-Height, Far-Street, Rycroft, Holme, and Westgate-Hill, comprises by admeasurement 2643 acres, principally the property of Col. John Plumbe Tempest. Tong Hall, the seat of Col. Tempest, is a stately mansion, erected by Sir George Tempest, on the site of an ancient Hall occupied by the De Tonge, Mirfield, and Tempest families for more than 750 years; it is situated in a finely-wooded demesne, comprising much beautiful scenery, and commanding extensive views." [3]

Early History of the Tempesta family

Spelling variations in names were a common occurrence in the eras before English spelling was standardized a few hundred years ago. In the Middle Ages, even the literate regularly changed the spellings of their names as the English language incorporated elements of French, Latin, and other European languages. Many variations of the name Tempesta have been found, including Tempest, Tempeste and others.

Outstanding amongst the family at this time was Robert Tempest, English High Sheriff of Durham from 1558-1562; Sir Thomas Tempest KT. (1594-1653), Attorney-General of Durham; and his son, John Tempest (died 1697), an English politician, Member of Parliament for County Durham (1675-1679); Pierce Tempest (1653-1717), English printseller, best known for the...
Another 51 words (4 lines of text) are included under the topic Early Tempesta Notables in all our PDF Extended History products and printed products wherever possible.

Migration of the Tempesta family to Ireland

Some of the Tempesta family moved to Ireland, but this topic is not covered in this excerpt. More information about their life in Ireland is included in all our PDF Extended History products and printed products wherever possible.

Migration of the Tempesta family

For many English families, the social climate in England was oppressive and lacked opportunity for change. For such families, the shores of Ireland, Australia, and the New World beckoned. They left their homeland at great expense in ships that were overcrowded and full of disease. Many arrived after the long voyage sick, starving, and without a penny. But even those were greeted with greater opportunity than they could have experienced back home. Numerous English settlers who arrived in the United States and Canada at this time went on to make important contributions to the developing cultures of those countries. Many of those families went on to make significant contributions to the rapidly developing colonies in which they settled. Early North American records indicate many people bearing the name Tempesta were among those contributors: Edward Tempest settled in Virginia in 1653; Robert Tempest settled in Virginia in 1635.

Motto: Metuenda Corolla Draconis
Motto Translation: The Dragon's Crest is to be Feared.