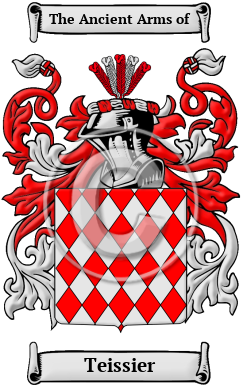 Early Origins of the Teissier family

The surname Teissier was first found in Périgord, where this eminent family held a family seat since ancient times.

Many of the branches had their noble status maintained in 1599, 1634, 1667, 1668, 1715 and so on. In recognition of their valiant conduct at war, many members of this noble family received lands and titles and were prominent citizens. This family had many members who were admitted to the Order of the Knights of Malta and to the Knights of Saint Cyr in 1706, 1751, 1768, and on August 7, 1773, Jeanne from the Redon branch of the family was admitted. Many distinctive members of the Tessieres family participated in the Assembly of Notables in 1789.

Urbain Tessier, born in 1624, son of Artus and Jeanne, travelled from France to Canada in the 17th century. After settling in the Canadian province of Quebec he married Marie Archambault, daughter of Jacques and Françoise, on 28th September 1648. They remained together in Quebec until Urbain's death at Montreal on 21st March 1689. [1]

Early History of the Teissier family

This web page shows only a small excerpt of our Teissier research. Another 110 words (8 lines of text) covering the years 1130, 1247, 1447, 1255, 1325 and 1447 are included under the topic Early Teissier History in all our PDF Extended History products and printed products wherever possible.

More information is included under the topic Early Teissier Notables in all our PDF Extended History products and printed products wherever possible.

In France, the name Teissier is the 1,092nd most popular surname with an estimated 4,951 people with that name. [2]

Migration of the Teissier family