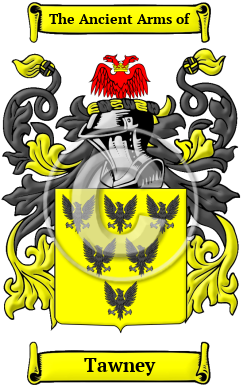 The name Tawney was brought to England in the great wave of migration following the Norman Conquest of 1066. The Tawney family lived in Normandy where this "baronial name derived from the Castle of Tani. Auvrai de Tanie is on the Dives Roll : and Robert de Tany witnesses William the Conqueror's charter to Selby Abbey, Yorkshire.He held a barony in Essex, when the name was given to Stapleford-Tany, Chignall-Tany, and Latton-Tany." [1]

Early Origins of the Tawney family

The surname Tawney was first found in Essex where Hasculf, son or Robert de Tany, who in 1140 had a great suit with Rualo de Abrincis, also contested some property with William de Boville, who was the father of Rainald and Gruel. Rainald, a benefactor of Bermondsey Abbey in Surrey, left no heirs, and Gruel, or Grailand, succeeded, and certified in 1165 that he held three knight's fees de veteri feoffamento.[1]

Early History of the Tawney family

Norman surnames are characterized by a multitude of spelling variations. The frequent changes in surnames are largely due to the fact that the Old and Middle English languages lacked definite spelling rules. The introduction of Norman French to England, as well as the official court languages of Latin and French, also had pronounced influences on the spelling of surnames. Since medieval scribes and church officials recorded names as they sounded, rather than adhering to any specific spelling rules, it was common to find the same individual referred to with different spellings. The name has been spelled Taney, Tanney, Tauny, Tauney, Tawney, Tawny, Tannie, Tani and many more.

Outstanding amongst the family at this time was Theaurau John Tany (bap. Thomas Totney 1608-1659), an English preacher and religious visionary. The morning of 30 December 1654, Tany made a large fire at Lambeth into which he cast his great saddle, sword, musket, pistols, books and bible and was committed to the Gatehouse prison where he was later bailed (1655) upon habeas corpus. "His surname is spelled in nine different ways, and seems to have been pronounced 'tawny.' A...
Another 78 words (6 lines of text) are included under the topic Early Tawney Notables in all our PDF Extended History products and printed products wherever possible.

In the United States, the name Tawney is the 15,974th most popular surname with an estimated 2,487 people with that name. [3]

Tawney migration to the United States +

Many English families emigrated to North American colonies in order to escape the political chaos in Britain at this time. Unfortunately, many English families made the trip to the New World under extremely harsh conditions. Overcrowding on the ships caused the majority of the immigrants to arrive diseased, famished, and destitute from the long journey across the stormy Atlantic. Despite these hardships, many of the families prospered and went on to make invaluable contributions to the development of the cultures of the United States and Canada. Early North American immigration records have revealed a number of people bearing the name Tawney or a variant listed above:

Tawney Settlers in United States in the 17th Century

Tawney Settlers in United States in the 18th Century

Historic Events for the Tawney family +