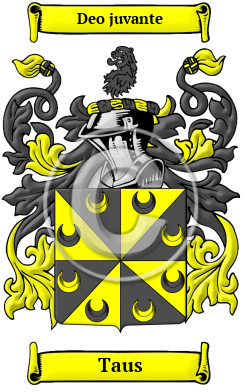 Early Origins of the Taus family

The surname Taus was first found in Perthshire (Gaelic: Siorrachd Pheairt) former county in the present day Council Area of Perth and Kinross, located in central Scotland, where they held a family seat from very ancient times, before and after the Norman Conquest in 1066.

The Tassie variant has a most interesting origin. "The Tassies had long resided in Pollokshaws, and were believed to have come from Italy as refugees, and to have settled in Scotland as tanners and skinners. " [1]

The name today is "a phonetic spelling of Gaelic Tamhas, 'Thomas.' The surname Taise, found in Mar in the seventeenth century, is probably another form of the name. " [2] And some of the earliest entries for the name include: Tawus M'Gillese, a tenant under the earl of Douglas in 1376, Tawis Michison who appears as a charter witness in 1415 and Taus ffrasser of Littlegarth who is mentioned in 1632. While these entries are the name as a forename, it was not until 1667 that the name was entered as a surname: William Taus, tailor in Dunkeld who died in 1667. [2]

Early History of the Taus family

This web page shows only a small excerpt of our Taus research. Another 107 words (8 lines of text) covering the years 1376, 1415, 1632 and 1733 are included under the topic Early Taus History in all our PDF Extended History products and printed products wherever possible.

Spelling variations of this family name include: Taws, Taw, Tawse and others.

More information is included under the topic Early Taus Notables in all our PDF Extended History products and printed products wherever possible.

Taus Settlers in Canada in the 18th Century