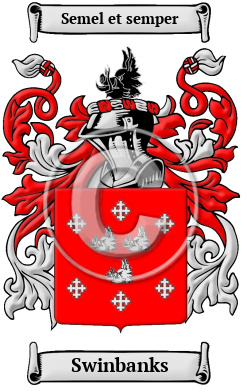 In ancient Scotland, Swinbanks was a Strathclyde-Briton name for someone who lived in Northumberland.

Early Origins of the Swinbanks family

The surname Swinbanks was first found in Northumberland, at Swinburn (Swinburne,) a township, in the parish of Chollerton, union of Hexham. " The family of Swinburn took their name from this place, which they probably held previously to the year 1272: in the reign of Edward II. It was the seat and manor of Adam de Swinburn. " [1]

Another reference states: "Swinburne in this county [Northumberland] gave name to this ancient family, the first recorded ancestor being John, father of Sir William de Swinburne, living in 1278, and Alan Swinburne, Rector of Whitfield, who purchased Capheaton from Sir Thomas Fenwick, Knt, in 1274. " [2]

"Long Witton Hall, an ancient mansion with additions by its late proprietors, the Swinburne family, is finely situated." [1]

And over in Bewcastle in Cumberland, "In the 7th of Edward I., license was granted to John Swinburn, to hold a weekly market and an annual fair." [1]

Early History of the Swinbanks family

Prior to the first dictionaries, scribes spelled words according to sound. This, and the fact that Scottish names were repeatedly translated from Gaelic to English and back, contributed to the enormous number of spelling variations in Scottish names. Swinbanks has been spelled Swinburn, Swinburne, Swinborn, Swinborne and others.

Notable amongst the family at this time was Henry Swinburne (1560?-1623), ecclesiastical lawyer, born at York about 1560, the son of Thomas Swinburne of that city, and his wife Alison. Sir John Swinburne, (d. 1706) was 1st Baronet from Capheaton...
Another 40 words (3 lines of text) are included under the topic Early Swinbanks Notables in all our PDF Extended History products and printed products wherever possible.

Migration of the Swinbanks family

In such difficult times, the difficulties of raising the money to cross the Atlantic to North America did not seem so large compared to the problems of keeping a family together in Scotland. It was a journey well worth the cost, since it was rewarded with land and freedom the Scots could not find at home. The American War of Independence solidified that freedom, and many of those settlers went on to play important parts in the forging of a great nation. Among them: William Swinburne settled in Virginia in 1655.