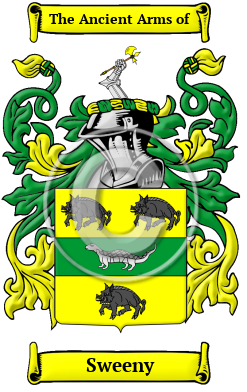 Irish names tend to vary widely in their spelling and overall form. The original Gaelic form of the name Sweeny is Mac Suibhne, which is derived from the word "suibhne," which means "pleasant."

Early Origins of the Sweeny family

The surname Sweeny was first found in County Donegal (Irish: Dún na nGall), northwest Ireland in the province of Ulster, sometimes referred to as County Tyrconnel. The name is derived from Suibhne O'Neill, who was a chieftain in Argyll, Scotland. His descendants migrated to Ireland as gallowglasses (mercenaries) prior to 1267. The three great septs of this name finally established themselves in Tirconnell in 14th century; they were known as MacSweeney Fanad, MacSweeney Banagh, and MacSweeney na dTuath, who were commonly referred to as 'MacSweeney of the Battleaxes.' They later became attached to the MacCarthys in the south and acquired their own territories and castles in Muskerry in County Cork.

Early History of the Sweeny family

This web page shows only a small excerpt of our Sweeny research. Another 69 words (5 lines of text) covering the years 1299 and 1310 are included under the topic Early Sweeny History in all our PDF Extended History products and printed products wherever possible.

Those scribes in Ireland during the Middle Ages recorded names as they sounded. Consequently, in this era many people were recorded under different spellings each time their name was written down. Research on the Sweeny family name revealed numerous spelling variations, including MacSweeney, MacSweeny, MacSwine, MacSwiney, MacSwyne, MacSwyny, MacWhinney, MacWhinny, MacWhinnie, MacSwiny, McSweeney, Swiney, Swinney and many more.

Prominent amongst the family at this time was John MacSween, a 13th-14th century nobleman who lost his lands in Scotland after the defeat of the forces and death of Alexander Og MacDonald, Lord of Islay in 1299. In...
Another 37 words (3 lines of text) are included under the topic Early Sweeny Notables in all our PDF Extended History products and printed products wherever possible.

In the United States, the name Sweeny is the 9,766th most popular surname with an estimated 2,487 people with that name. [1]

Sweeny migration to the United States +

During the 19th century thousands of impoverished Irish families made the long journey to British North America and the United States. These people were leaving a land that had become beset with poverty, lack of opportunity, and hunger. In North America, they hoped to find land, work, and political and religious freedoms. Although the majority of the immigrants that survived the long sea passage did make these discoveries, it was not without much perseverance and hard work: by the mid-19th century land suitable for agriculture was short supply, especially in British North America, in the east; the work available was generally low paying and physically taxing construction or factory work; and the English stereotypes concerning the Irish, although less frequent and vehement, were, nevertheless, present in the land of freedom, liberty, and equality for all men. The largest influx of Irish settlers occurred with Great Potato Famine during the late 1840s. Research into passenger and immigration lists has brought forth evidence of the early members of the Sweeny family in North America:

Sweeny Settlers in United States in the 17th Century

Sweeny Settlers in United States in the 19th Century

Sweeny Settlers in Canada in the 18th Century

Sweeny Settlers in Canada in the 19th Century

Sweeny Settlers in Australia in the 19th Century

Sweeny Settlers in New Zealand in the 19th Century