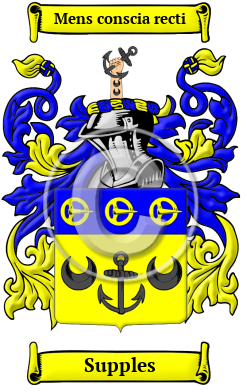 Early Origins of the Supples family

The surname Supples was first found in counties Cork and Limerick (Irish: Luimneach) located in Southwestern Ireland, in the province of Munster, where the name is present and quite numerous in almost every extant record. The first ancestor of the Supples family in Ireland came in 1171 as a member of Strongbow's forces, and was granted lands in Limerick and Cork.

Early History of the Supples family

This web page shows only a small excerpt of our Supples research. Another 66 words (5 lines of text) covering the year 1848 is included under the topic Early Supples History in all our PDF Extended History products and printed products wherever possible.

Spelling variations of this family name include: Supple, Soople and others.

Another 47 words (3 lines of text) are included under the topic Early Supples Notables in all our PDF Extended History products and printed products wherever possible.

Migration of the Supples family