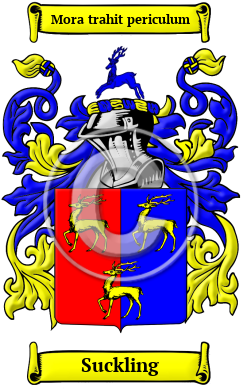 Early Origins of the Suckling family

The surname Suckling was first found in Norfolk at Woodton, a parish, in the union of Loddon and Clavering, hundred of Loddon. This village was home to the family from ancient times. "The living is a rectory, valued in the king's books at £6. 13. 4., and in the gift of the Rev. A. Suckling: the tithes have been commuted for £615, and the glebe comprises 27 acres, with a house. The church [(Woodton All Saints)] is chiefly in the decorated English style, with a circular tower of earlier date, surmounted by an octagonal turret, and has some handsome monuments to the Suckling family." [1]

The Hundredorum Rolls of 1273 list Adam Sucklin and Robert Sucling in Oxfordshire and Walter Sucling in Suffolk. [3]

Early History of the Suckling family

Notables of this surname at this time include: Robert Suckling (1520-1589), of St. Andrew's, Norwich, Norfolk, an English politician; and Sir John Suckling (1569-1627), an English politician who sat in the House of Commons at various times between 1601...
Another 38 words (3 lines of text) are included under the topic Early Suckling Notables in all our PDF Extended History products and printed products wherever possible.

Suckling migration to the United States +

Suckling Settlers in United States in the 17th Century

Suckling Settlers in Australia in the 19th Century

Suckling Settlers in New Zealand in the 19th Century