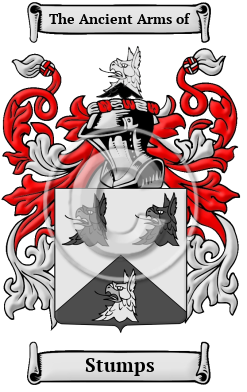 Early Origins of the Stumps family

The surname Stumps was first found in Sussex where Martin and William Stumpe were registered as holding lands in the Subsidy Rolls of 1332. [1] The name is thought to have a similar origin as the name Stubbe, from the Middle English "atte stumpe", meaning "dweller by the stump." [2] [3]

The next record found of the family was in Colchester, Essex where Henry Stompe, Stoompe was listed in 1373. [1]

Early History of the Stumps family

Spelling variations of this family name include: Stump, Stumpe, Stomp, Stompe, Stumpes, Stompes and others.

Distinguished members of the family include William Stumpe (fl. 1498-1552) of Malmesbury, Wiltshire, the richest and most famous clothier in Wiltshire. He would later become a politician. His father is said to have been a weaver and at one time parish clerk of North Nibley in east Gloucestershire, where Stumpe's brother Thomas still described himself as a 'husbandman' in his will of 1551. William is first recorded as a resident of Malmesbury in 1524, when the assessments for subsidy show him as already one of the town's four richest inhabitants. At the dissolution of Malmesbury Abbey, he was able to acquire...
Another 175 words (12 lines of text) are included under the topic Early Stumps Notables in all our PDF Extended History products and printed products wherever possible.

Migration of the Stumps family

Some of the first settlers of this family name or some of its variants were: settlers who were recorded from the mid 17th century in the great migration from Europe. Immigrants settled along the eastern seaboard from Newfoundland, to Maine, to Virginia, to the Carolinas, and to the islands. Thomas Stump arrived in Virginia in 1635.