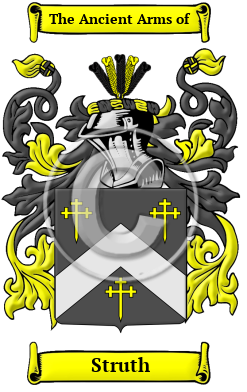 Early Origins of the Struth family

The surname Struth was first found in Suffolk where the family name was first referenced in the year 1188 when Aileric Strutt held estates in Bury St Edmunds. [1]

Although it is said that the family are descended from Godfried Strutz de Hinklred Chief of the Swiss Auxilliaries in 1240, who obtained his freedom, it should be noted that the family were settled in Suffolk at least some 60 years before.

Walter Strut was listed in Norfolk in 1242 and later, William Strout was found in the Subsidy Rolls for Cambridgeshire in 1327. [1]

"Strutt is an old and often distinguished Essex name. The Strutts held lands in Wickham St. Pauls in the 15th, 16th and 17th centuries. Sir Denner Strutt, Baronet, of Little Warley Hall, in 1641 owned the manor of Little Warley; Mr. John Strutt, of Biley Mills, in 1743 came into the possession of an estate in Snoreham parish (M.), which his descendants have held up to recent times. Maldon was represented in Parliament in the middle of last century by John Strutt of Terling and by his son early in the present century, a family since ennobled. John Strut of Hadley, Suffolk, held the manor of Picotts in Ardley parish, Essex, in the 17th century. Strutt was a common name in Derbyshire last century, especially in Blackwell; the Strutts of Derby then obtained eminence for their inventions in connection with the weaving trade (Glover's "Derbyshire"). In the 13th century the name of Strut or Strutt was represented in Cambridgeshire, Norfolk, and Wiltshire." [3]

Early History of the Struth family

Spelling variations of this family name include: Strutts, Strutt, Strutz, Strout, Struth, Strowt and others.

Distinguished members of the family include Messrs. Strutt who built a cotton-mill and a large cotton-manufactory and some extensive bleaching and dye works in Milford, Derbyshire in the late 1700s. "These establishments afford employment to the...
Another 36 words (3 lines of text) are included under the topic Early Struth Notables in all our PDF Extended History products and printed products wherever possible.

Struth Settlers in Australia in the 19th Century