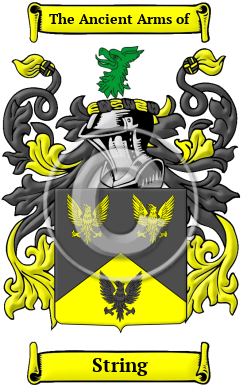 The Norman Conquest of England in 1066 brought many new words to England from which surnames were formed. String was one of these new Norman names. It was specifically tailored to its first bearer, who was a strong or courageous person. Checking further we found the name was derived from the German word streng, of the same meaning. It evolved to be an occupational name for "one who made strings for bows." [1] [2]

"In war if a string break, the man is lost and is no man, and his weapon is gone, and although he have two strings put on at once, yet he shah have small leisure and less room to bend his bow, therefore, God send us good stringers both for war and peace." [3]

Early Origins of the String family

The surname String was first found in Nottinghamshire where they held a family seat from early times, where they were Lords of the manor of Eaton, and were conjecturally descended from Fulk, who held the lands of Eaton from Roger de Bully at the time of the taking of the Domesday Book in 1086. [4] The lands, at that time, consisted of two mills and a garden. Eaton is the celebrated site of the Battle of the Idle in 617 between Redwald and Ethelfrith of Northumbria.

The name grew to become a "common Yorkshire name" [5] which we will explore shortly. First we will search through early rolls: Walter Stringere was listed in the Curia Regis Rolls for Wiltshire in 1194; and Roger le Strenger in Yorkshire rolls in 1293. [5]

Early Somerset records show Godwynn Strenger, Somerset, 1 Edward III (during the first year of King Edward III's reign.) [6] The Yorkshire Poll Tax Rolls of 1379 include: Willelmus Strynger; Johannes Strenger; and Ricardus Stryngar as all holding lands there at that time. [7] In Scotland, it was a rather rare name but we did find "Laurence Stringhar [who was] admitted burgess of Aberdeen, 1486." [8]

Early History of the String family

This web page shows only a small excerpt of our String research. Another 94 words (7 lines of text) covering the years 1574, 1575 and 1646 are included under the topic Early String History in all our PDF Extended History products and printed products wherever possible.

A multitude of spelling variations characterize Norman surnames. Many variations occurred because Old and Middle English lacked any definite spelling rules. The introduction of Norman French to England also had a pronounced effect, as did the court languages of Latin and French. Therefore, one person was often referred to by several different spellings in a single lifetime. The various spellings include Stringer, Stringar, Stringers and others.

More information is included under the topic Early String Notables in all our PDF Extended History products and printed products wherever possible.

String Settlers in Australia in the 19th Century