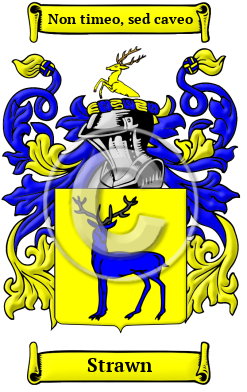 Early Origins of the Strawn family

The surname Strawn was first found in Kincardineshire (Gaelic: A' Mhaoirne), a former county on the northeast coast of the Grampian region of Scotland, and part of the Aberdeenshire Council Area since 1996, where the family sometimes spelled their Strachen or Straughan.

The family derive their name from the valley of the Aan (Strath Aan). The earliest record of the Clan was in 1057 AD, when they accompanied King Malcolm Canmore northward in his attempt to overthrow the King MacBeth after his usurpation of the Scottish throne.

The Clan Strachan was one of the major Clans participating in the Battle of Lumphanen, 25 miles west of Aberdeen. MacBeth died in the Battle on the 15th day of August, 1057 AD. MacBeth's Cairn may still be seen there to this day. Later in 1165 AD, a Walderus de Strathecan had extensive territories in the lands of Strachan (pronounced Stawn, but many in North America have now reverted to the original pronunciation of Stracken).

Early History of the Strawn family

Spelling variations of this family name include: Strachan, Strawn, Strachen, Straughan, Straghan and many more.

Notable amongst the Clan at this time was David Strachan (died 1671), Church of Scotland prelate, Bishop of Brechin (1662-1671). Archibald Strachan (died 1652) was a Scottish soldier from Musselburgh, Edinburghshire who fought in the Wars of the Three Kingdoms, reaching the rank of Colonel. He was excommunicated at Perth on 12 January 1651; in April he was declared a traitor and his goods were...
Another 64 words (5 lines of text) are included under the topic Early Strawn Notables in all our PDF Extended History products and printed products wherever possible.

In the United States, the name Strawn is the 5,251st most popular surname with an estimated 4,974 people with that name. [1]

Migration of the Strawn family to Ireland

Some of the Strawn family moved to Ireland, but this topic is not covered in this excerpt.
Another 93 words (7 lines of text) about their life in Ireland is included in all our PDF Extended History products and printed products wherever possible.

Strawn migration to the United States +

Strawn Settlers in United States in the 19th Century

Strawn Settlers in United States in the 20th Century

Motto: Non timeo, sed caveo
Motto Translation: I fear not but am cautious