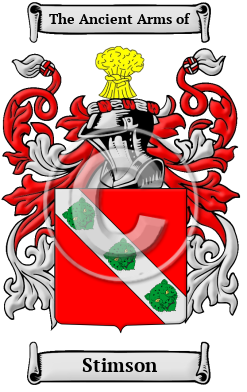 This scripture name, like many others, was not introduced here until the Norman Conquest, after which we find it in the form of Fitz-Stephen. It occupies a large place among our surnames in the usual genitive forms of Stephens. Stevens, Steevens, Stephenson, Stevenson, &c. A nicked or abbreviated form furnishes us with our Steen, Steenson, Stimson, Stimpson, Stinson, Stibbs: perhaps also Stubbs, Steff, Stiff, and Stennett. Tiffany and Tiffin, from Stephanus, belong to the same category. [1]

"This name was introduced into Britain by the Normans, with whom it was a favorite. Although found occasionally in England before 1066 its use then was due really to Christian tradition, Stephen (Stephanos) having been the first Christian martyr after Christ." [2]

Early Origins of the Stimson family

The surname Stimson was first found in Essex where Adam Steveneson was listed in the Subsidy Rolls of 1327. Later, John Stephenson was listed at Whitby, Yorkshire in 1395. [3]

"The present family of Stimpson may possess an ancestor in John Stimpson, who lived at Burston, in Diss, in 1742." [4]

Early History of the Stimson family

Notable amongst the family name during their early history was Thomas Stephenson (1552-1624), English Jesuit, born in 1552 of Catholic parents at Windlestone in the parish of St. Andrews, Auckland, Durham. He studied his humanities in England, and went through the higher course at the English College of Douay, then temporarily settled at Rheims, where he arrived on 22 June 1581. He was ordained priest there on 21 Dec. 1581, and was sent to the English mission on 13 April...
Another 79 words (6 lines of text) are included under the topic Early Stimson Notables in all our PDF Extended History products and printed products wherever possible.

In the United States, the name Stimson is the 12,510th most popular surname with an estimated 2,487 people with that name. [5]

Migration of the Stimson family to Ireland

Some of the Stimson family moved to Ireland, but this topic is not covered in this excerpt.
Another 186 words (13 lines of text) about their life in Ireland is included in all our PDF Extended History products and printed products wherever possible.

Stimson migration to the United States +

Stimson Settlers in United States in the 17th Century

Stimson Settlers in United States in the 19th Century

Stimson Settlers in Australia in the 19th Century

Historic Events for the Stimson family +